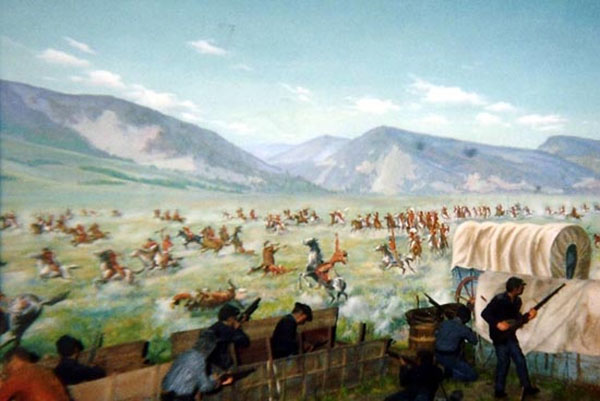 The Hayfield Fight of 1867 was a battle pitting Sioux and Cheyenne warriors against the US Army in a feat of courage, good luck, and controversy.

On August 1, 1867 approximately 800 Lakota (Sioux) and Cheyenne warriors attacked a contingent of soldiers and civilian workers harvesting hay in a field approximately two and a half miles from Fort C. F. Smith. The Lakota and Cheyenne had been at war against the US Army for a year over white infringement on their prized hunting grounds. A path had been forged by emigrants through the Powder River country of present day Wyoming and southern Montana for travel to newly discovered gold fields. The route would come to be known as the Bozeman Trail.

In an attempt to protect travelers along the route, the government authorized the construction of three forts along the Bozeman Trail. Fort C.F. Smith was the northernmost and was built on the banks of the Bighorn River. In retaliation, a large contingent of several thousand warriors met about fifteen miles east of C. F. Smith to plan the destruction of the forts. They decided to divide their force into two groups. The first would travel ninety miles south and attack Fort Phil Kearny. After delaying one day, the second group would attack Ft C. F. Smith.

At about 9:30 in the morning, warriors stormed a party of 20 men of the 27th Infantry Regiment and six contract employees in the hayfield. The soldiers and civilians took cover in a corral they had built at its edge. Constructed of heavy logs and a latticework of densely-woven willow branches, the corral provided a shield that was impossible to see through from the outside.

Instead of having cumbersome muzzle-loaders, the besieged soldiers had recently been equipped with modern fifty-caliber breech-loading rifles that could quickly be reloaded with cartridges. Civilians carried repeating Henry and Spencer rifles. Each man also had a pistol though they rarely used them during the battle.

Early in the engagement, 2nd Lieutenant Sigismund Sternberg, commanding officer of the hay-cutting detachment, stood up within the corral. He attempted to order his men to also stand and “fight like men.” Shortly after those words left his mouth, he was shot dead along with Private Thomas Navin. Sergeant James Norton took command for a short time until he was severely wounded. A civilian, Don Colvin, would lead from that point on and was credited for his rapid and accurate gunfire against the enemy. The group would thwart three separate charges by the Indians and narrowly escaped being burned out of the corral.

Private Charles Bradley volunteered to ride to the fort and take word of their desperate situation. Although he was pursued by several warriors, he managed to make it to the fort safely.

On an overlooking hill, Captain Hartz was escorting a wood-cutting party out of the mountains and witnessed the ferocious fighting. Hastily returning to the fort, he asked its commanding officer, Lieutenant Colonel Luther P. Bradley for permission to lead reinforcements to the hayfield. Bradley refused.

The battle would rage on until four in the afternoon before three companies commanded by Major Thomas Burroughs were sent out to help. As he was leaving the fort, Private Bradley arrived with news of the battle. When the column arrived at the hayfield, the warriors had already given up on attacking the corral, but many were still present in the surrounding hills. They were driven off with the aid of a howitzer. Lakota and Cheyenne losses were estimated at twenty-five dead and wounded.

Miraculously, the toll on the men in the corral amounted to two soldiers and one civilian dead with three others wounded. Of the 32 animals in the corral at the start of the battle, all had been either killed or wounded with exception of one horse and one mule.

Controversy would swirl around the decision Lt. Col. Bradley had made to delay sending reinforcements to the hayfield. Eyewitnesses to the battle chastised him as being a coward and unfit for command. According to F. G. Burnett, a civilian worker fighting in the hayfield, “the commander of Fort C. F. Smith disgraced himself that day, and that is the reason there never has been any official report made by the military authorities of the hayfield fight near the fort.” In preparing his book detailing the events of the battle, Mr. Brininstool noted, “General King told me personally that it was a forbidden topic in army circles (for the plain reason that the commander, [Lt. Col.] Bradley, played the coward in refusing to allow a relief party to leave the fort and aid the 19 men in the hayfield).”

Unknown to both of these men, an official report was filed by Bradley after the battle. In it, he makes no mention of why he delayed the attack other than to say that he was not aware that the battle was in progress until later in the day. He admitted that he knew a large band of warriors was in the immediate area. Twenty-one men were sent out to check the route for hostile activity before dispatching a train of wagons to the hayfield in the afternoon. When they encountered resistance, they fell back and were reinforced by the two additional companies under Major Burroughs. This combined force is what would eventually drive the Indians away from the hayfield and save the men in the corral.

Whether he knew the battle was in progress or not, it is possible that the Fetterman Massacre from the previous year was still fresh on Bradley’s mind and he felt it reckless to send reinforcements against a numerically superior enemy and possibly jeopardize the safety of the fort. Although it would have been tragic to lose the men at the hayfield, his first priority was to the safety of the rest of his command.

While the controversy still exists today, the battle went down in history as a resounding success for the Army albeit a short-lived one. The fort was abandoned less than a year later and the surrounding lands reclaimed by the Lakota and Cheyenne.