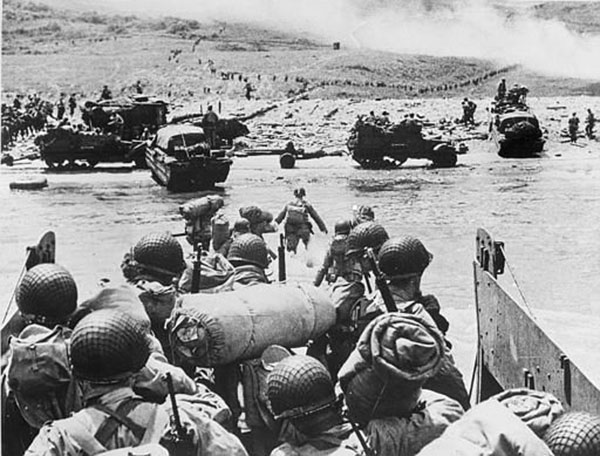 D-Day was, probably, the most decisive battle of the Second World War. It was the largest amphibious invasion of all time – over 155,000 Allied troops were disembarked on the first day. [1] When launched on June 6, 1944, it came as a total surpise. Over the three months that followed, the Germans lost most of France, despite having an enormous superiority on D-Day. [2] Ultra was key in causing this rapid success.

The success of D-Day depended on three prerequisites: Allied air and naval supremacy and the dispersal of German troops throughout Western Europe. [3] By mid-1944 the first two did not pose much of a problem; the Allied bombers pounded Germany unmercifully and the U-Boat threat no longer existed. The third one, however, was of major concern. Had the Germans ever discovered that Normandy was the launching site for D-Day, the Allies would have faced a disaster of the first magnitude. This did not happen, however, due to many reasons

The most important reason was the development of an extensive deception plan, which was named Bodyguard. It had two major objectives; 1) to confuse the Germans about when and where the invasion was to take place, and 2) to cripple the Germans once the invasion began. [4] It was the most complicated deception plan of the entire war, if not of all time.

The plan was put in operation using Ultra. In 1941, the British broke the Abwehr (the German Secret Service) codes. [5] As a result, they knew the identities of all German agents, and were able to capture them. [6] Some were executed or imprisoned, but many were successfully turned into double agents. Throughout the rest of the war, these agents sent the Germans misleading information that was accepted as being accurate.

The centerpiece of the deception plan was to convince the Germans that the invasion would occur in the Pas de Calais area. This proved to be relatively easy. As early as October 1943, Field Marshal Gerd von Rundstedt (the Commander of the German Armies in France) became convinced that the Allies would invade there, an opinion he sent via Enigma to OKW (the German military headquarters). [7]

To keep the Germans preoccupied with Pas de Calais, the Allies created the mythical 1st United States Army Group (FUSAG). It was “placed” opposite the Germans in Dover, and “commanded” by US General George C. Patton. [8] From October until the end of July 1944, when this deception was finally dropped, it remained a primary focus of Bodyguard. At all times, it was imperative to keep the Germans convinced that the invasion site was Pas de Calais.

Luckily for the Allies, a significant amount of Ultra was being deciphered by the Allies in 1943 and 1944. This made it easy to measure the plan’s effectiveness as it was being carried out. During the spring of 1944, Ultra was thorough enough to offer a nearly complete picture of the enemy. On May 29 (one week before D-Day) a message, regarding fuel allocations to Atlantic Wall construction projects, was intercepted by Bletchey Park. It started out by saying that the fuel allocations from OKW was:

approximately 20 percent less than applied for on basis of summer programme. There would be sufficient for the concrete envisaged in the programme that it could be carried out without considerable disturbance {emphasis mine}….. C-in-C West (von Rundstedt) therefore requests that as a precautionary measure a fuel reserve be made available for the construction…. recourse would only be had to this reserve if after the first ten days of June the situation can be reviewed as a whole. [9]

Instead of being worried about the impending invasion, the Germans, as shown above, were as Ronald Lewin put it, “calmly discussing concrete and fuel and improvement of defenses as though unconscious of time and danger.” [10] This complacency was deeply reassuring to the Allies.

On June 6, the Allies invaded Normandy with almost total surprise. Although some German troops put up heavy resistance, the German leadership acted as though nothing significant had happened. Hitler and his generals remained convinced that the landings were only a diversion, and that the real invasion (the Schwerpunkt) would take place later and in the Pas de Calais area. [11] The 15th Army (the largest army in Western Europe), instead of moving south to encounter the Allied forces, remained in Pas de Calais. Had this not been the case, the Allies might have faced a disastrous situation. [12] Thanks to Bodyguard, it did not happen.

Bodyguard was not the only reason, however, for D-Day’s success. Among the others was the weather. Before the U-Boat threat was removed in May 1943, the Germans maintained several weather stations throughout the Atlantic. After May 1943, the Germans were largely ignorant of Atlantic weather patterns. In contrast, the Allies were aware of much of the weather on the Continent, mainly through Ultra encrypts. [13] This disparity was a distinct disadvantage for the Germans.

Because of Overlord’s strict landing requirements, there were only three days on which the invasion could have occurred: June 5, 6, and 7. [14] It was imperative that the weather was good on at least one of these days. Otherwise, the invasion would have to have been delayed until the end of June or the beginning of July. By this tie, it probably would have been too late, as the Germans would have been better fortified. Thus the invasion had to take place in June, at the very latest, if it were to be assured a reasonable chance of success.

A massive Atlantic storm beginning on June 4 forced D-Day’s postponement. [15] It appeared that the weather would prevent the landings from taking place. On the next day, however, a short break in the weather pattern emerged, leading Eisenhower to give the go-ahead for D-Day. [16] The Germans were unaware of this break; all they saw was the bad weather hitting the shores of Normandy. This ignorance was fatal to the Germans, as the Allies were able to land in almost total surprise.

Ultra was just as significant in the fighting afer the landings on June 6 as before. By the time of the Normandy invasion, Bletchey Park was reading Enigma extensively and in “real time.” [17] The Allied generals were provided every conceivable piece of information about the Germans; their military command structures, the identity and operational strength of divisions being sent to Normandy, and German strategy. [18]

In the first week of the invasion, Ultra was of crucial importance. As the Allies struggled to advance beyond their beachheads, they were aware that the Germans were suffering from acute fuel shortages. [19] This encouraged them to launch immediate offensives after their beaches became secured. These offensives, although costly, managed within two weeks to conquer the French port of Cherbourg and the entirety of the Cotentin peninsula. [20] Even after one of the worst storms ever to hit Western Europe hit in late June, the Allies became entrenched enough to avoid being driven “into the sea.” [21]

It is at this point that Hitler lost the war. The Germans were forced to fight a two-front war again (three with Italy). This had proved disastrous during the First World War, and it proved to be again during the Second as well. This was realized by some in the German military who started to display defeatist attitudes. The assassination attempt on June 20, 1944, against Hitler was a natural outgrowth of these attitudes. [22]

By the end of August, most of France was liberated. Paris fell on August 25. [23] The Germans, however, held on for another nine months. They launched one “last hurrah,” the Battle of the Bulge in December 1944. This surprised the Allies but did not affect the outcome of the war. [24] By this point, it was a foregone conclusion that the Germans had lost. Four months later, Adolf Hitler ended the “Thousand Year Reich” with a bullet to his head.