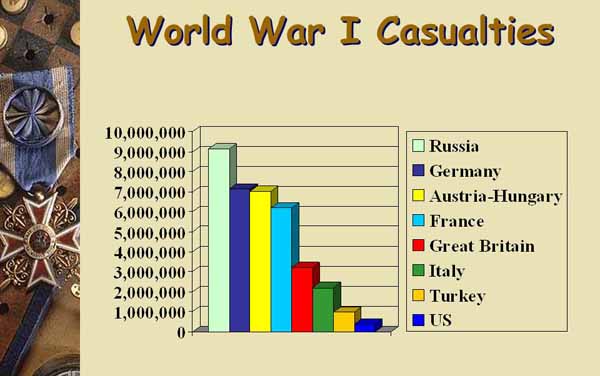 There is no question that the Great War – later to become known as World War One – was the most violent. Bloodiest conflicts of its time,some would say the most violent in history itself. There were more casualties in this war in the four years it scourged the earth(1914-1918), over 20,000,000,than in any of the wars fought previously or since.

Originally a European war, it spread throughout the globe in just a few months! By 1917-when America finally entered into the international fray despite being a paficist holdout for nearly three years, 93% of the world-nearly the whole world-was at war. It was a war fought with unusual proportions-and unusual weapons: poison gas,machine guns-which could literally rip apart dozens of human bodies at a time in s a few seconds; airplanes,originally created for peaceful purposes, which was by this time being utilized as a virtual vehicle of destruction as well as tanks and submarines.

The casualties were swift and horrble,as soldiers choked to death on mustard gas or other poisonous gases or was mentally and physically deformed for life. Other casualties were literally riddled to pieces with machine-gun bullets. Dead bodies would lay in the trenches for days in some cases,decomposing,smelling up the whole war zone with its rancid,overbearing stench or being eaten up by rats. In some cases the effects were more psychological than physical, as many doughboys came back emotinally disturbed for life, some even being institutionalized or even committing suicide to end the agony.

But interestingly enough,more people died during WWI,not as war casualties,but casualties to something much less subtle than war-disease. The Spanish Influenza Epidemic,or the Spanish Flu, for short, killed over 20,000,000 casualties – which really accounted for much of the victims; in fact, it killed more people in only 4 months than the war killed in four years!

The Great War suddenly ended on November 11,1918-after 4 long,bloody years. But its physical and psychological effects have never been forgotten in the nearly 90 years since it ended. Even though it was believed that World War I was “the War to end all wars’, in reality,it was the war to end all peace. There has not been a peaceful day,or a day in the world in which there was no war has been fought since. World War II was even more violent,though it did not claim as many casualties – more than 9,000,000 lives claims. In the years since 1945-over 30 years after WWI began-have been an estimated 500 or more wars thoat have been fought unrelentingly throughout the earth. Even to this day-2008-wars still continues to plague the planet. Will there continue to be man-made mindless wars? The answer the near future gives may well prove to be thrilling as well as intriguing.