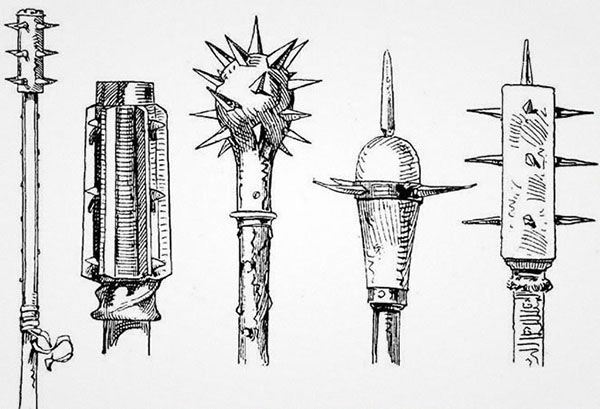 Medieval knights had many different weapons in their arsenal, but they were all designed to inflict the most damage possible to their opponents on the battlefield.

The knights of Europe were formidable warriors made even more lethal by the medieval weapons they wielded in battle. But it wasn’t only the knight, life in medieval times was brutal and every man was expected to fight for his king and country. While there were many unique weapons used, they can be broken down into several groups.

To many knights, their sword was their most prized possession and in such a violent time swords were incredibly valuable and was a status symbol carried only by knights and nobles who could afford them. There were several different types of swords used including both single (falchions) and double-edged blades (broadswords, long sword, claymores, flamberges and great swords). A dagger served as auxiliary weapons when a knight lost his sword during battle and they were styled as miniature swords. Some examples of daggers include the anelace, the baselard, the dirk, the mercy giver (used to deliver the fatal blow to a seriously injured knight), the poniard, the rondel and the stiletto.

While some knights were also expert bowmen, archers were usually foot soldiers who couldn’t afford expensive weapons like swords. Manual bows required the archer to pull back on the drawstring to create enough force to propel an arrow. Examples are self bows, flat bows and long bows (which were made of yew and therefore also called yew bows). Crossbows use a mechanical system to create the same or greater force of a manual bow. Usually they were made of ash or yew, although the later arbalest was made of steel and could fire steel bolts. In 1139 crossbows were banned by the pope because they were so deadly. Both types of bows shot arrows and in Europe there were a couple different types of arrowheads. Bodkins were smaller points which made arrows fly farther, they were also used to penetrate chain mail. Broadheads on the other hand were larger points with wider cutting surfaces to inflict more damage.

Medieval polearms were the most popular weapons of Europe because they allowed a soldier to stay a safe distance from his opponent and could be used either on horseback to gain the advantage of the height of the horse or by a foot soldier as a means of unhorsing his opponent. Spears were the most common type of polearm and were predominantly used for thrusting. Some examples include lances, pikes, bills, glaives, guisarmes, man catchers, partisans, plansons, ranseurs, septums, voulges and swordstaffs. Axes had large flat heads that offer more cleaving power than a sword. Because of this, they were better weapons against armored knights. Many axes were used as polearms (such as battleaxes, pole axes, Danish axes and Lochaber axes), however, there were also smaller axes that could be thrown such as franciscas and hurlbats. War hammers could range in size from that of a spear to close to a mace and were designed to damage the knights opponent without penetrating armor. Later war hammers added a spike on the opposite side that could be used to penetrate thinner armor, as a grappling weapon or to trip up a horse. Certain polearms combined two of these types in one weapon such as the halberd which could be used as a spear or axe, or a hache which combined an axe and a hammer.

This group of weapons was probably the most menacing as they were designed to tear through armor. The mace is basically a club with a heavy head on a two to three-foot long handle. The medieval version is a flanged mace which included protruding metal edges that made it possible to penetrate heavy armor and were used by both knights and peasants. A morningstar is essentially a spiked mace or flail, and the spikes made it easier to kill a knight in heavy armor. They were usually made of wood with metal spikes. Flails were not only dangerous to the soldier’s opponent but also to anyone who wielded one due to their unpredictability. Originally an agricultural too, the flail evolved into a handle with one or more balls (sometimes with metal spikes) attached by a chain and were primarily used by peasants.

The Introduction of Gunpowder

Gunpowder was introduced to Europe in the early to mid 1200s. Early cannons and hand guns were metal cylinders that shot metal arrow-like bolts wrapped in leather and were set off by inserting a heated wire into a touch hole. These canons were mainly used as siege engines to knock down castle walls. Later canons became more mobile and the bolts were replaced with balls that could weigh up to 200 pounds.