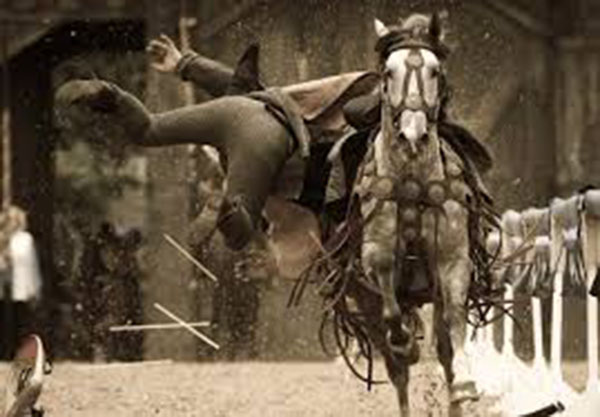 Jousting is often depicted in film as quite a romantic sport, with the lady gracing her champions lance with her scarf. In reality it could be a deadly past time.

Jousting is a medieval sport that originated between the 10th and 13th centuries. It is a sport that evolved with the emergence of the knight on horseback as a feared fighting force across Europe.

Godfrey de Preuilly, a Frenchman is credited with writing the rules for the sport of jousting, but he didn’t live long enough to see his rules in action as the first tournament took place in 1066, the year of de Preuilly’s death.

Noblemen were expected to pay for their land in a form of tribute to the monarch. Usually this was achieved by supplying trained knights to fight for them. The jousting tournament originally started as organised battles. Two or more knights on horseback fought using lances as their first choice of weapon, although battle axes, daggers and swords were also used. The tournaments were developed by noblemen in order that their knights could practice their combat skills in mock battle.

By the 12th century jousting had become so popular that Kin Henry II banned the sport as so many knights were gathering in one place. However, the ban was revoked when Henry’s son, Richard I ascended to the throne.

Richard ordered that licences would be granted in order that tournaments could be held. The order was referred to as the Conflictus Gallicus. The 5 areas in England that were granted licences were between:

Knights wishing to ‘tourney’ had to purchase a licence in order to participate in the event; however foreign knights were banned from competing.

The Development of the Statute of Arms

In 1229 the Statute of Arms for tournaments was ordained by King Edward I. This laid down new rules for tournaments which were intended to reduce the risk of sever injury to the Knights as they fought. These included the development of new weapons for use in the tournaments. New lances were developed called ‘the lance of peace’. The tip of the lance had been rebated (blunted) or replaced by a coronet (a crown shaped head) in order to disperse the effect of the impact of the lance on the body.

The death rate during tournaments fell dramatically following the adoption of the new rules as Knights no longer tried to kill one another, instead, the aim of the joust was to unseat their opponent. It was regarded as a breach of honour to kill their opponents.

Prior to the 17th century knights were participating in 3 forms of tournament:

The popularity of jousting and tournaments diminished much quicker in England than across Europe due to the emergence of other forms of entertainment such as the theatre. However, tournaments are still enacted today, albeit with much more stringent safety practices.