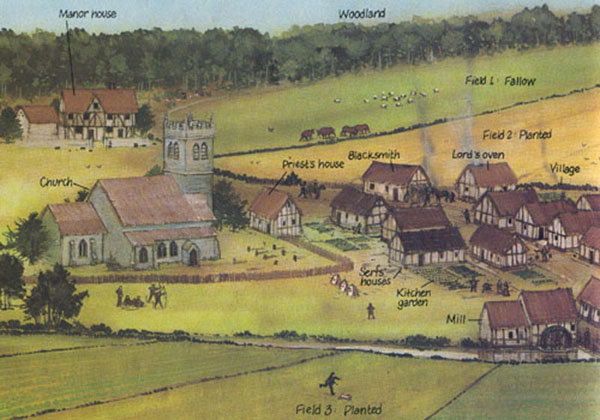 A medieval manor was an estate owned by a Lord of the Manor, granted to him by the monarch.

The Lord of the Manor lived in a manor house, and employed knight and villeins, who fought for their Lord or worked the land and performed feudal obligations such as donating part of their annual yield to their Lord.

Life on the Medieval Manor

As far as possible, a medieval manor was self-sufficient, ideally producing enough foodstuffs to feed the entire community, with any surplus sold or traded. There were three broad categories of land on a medieval manor; the demesne – the lord’s own land from which he provided for his own household; dependent land which was worked by the peasants on the lord’s behalf; and peasant land, which was worked by the peasants for their own benefit, and for which they paid rent to the lord.

Despite the relative security of a Lord’s position within medieval society, a manor could be taken from a Lord at any time by the king who had granted it; it was held in the monarch’s gift. The peasants who worked on the land were the lord’s servants and looked to him for protection in times of danger, such as war. In turn, they were expected to work a certain portion of their week on the lord’s own lands, and males could be summoned for military duty on behalf of the lord.

Manorial Court Records are one of the few items of documentary evidence which have helped historians understand more about this way of life. The most important lords held regular courts at their manors as a way of ensuring and administering justice. Each manor had its own laws, which varied depending upon area and local custom. The proceedings of each court were recorded on manor rolls, some of which still survive today to give historians an idea of justice in the Middle Ages.

Many of the matters dealt with in such courts centred around the abuse or misuse of facilities within the manor lands. Many lords had the right to charge for the use of milling facilities, wine pressing and the right to hunt on the lord’s land, for example. Anyone caught using these facilities without paying, or undermining the lord’s earning power by setting up competitive service could expect a stiff fine, or a physical punishment such as branding or even hanging.

The Manorial Documents Register, detailed on the UK’s National Archives website is a computerised, searchable, database of the country’s surviving Manorial Court Records, which is still being developed. This shows the type and variety of Manorial Court Records available in England, and where they can be seen.

The end of the Manorial System

The beginning of the decline of the manorial system was the Black Death which reached Europe in 1348. With its high death rate, the Black Death meant between a half and third of the population disappeared, with the consequence that large portions of land were suddenly unattended. This meant that the demand for labour was higher; and those peasants who had survived could command better terms and conditions.