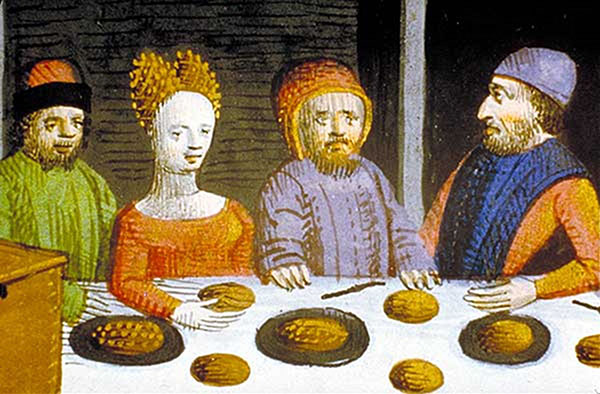 Porridge, a centuries old staple food, was originally the only way to obtain nutrition from grain, but with the arrival of bread, it became a less popular side dish.

When thinking of porridge, most people think of a traditional oatmeal breakfast product. But Quaker Oats is a long way from the original porridge made for centuries by rich and poor alike as a staple food before yeast products, flour mills, and baking changed people’s diets.

Originally, porridge was made from whatever grain was native to a geographic area. Barley was common throughout Europe, but wheat was used frequently, too. Porridge has also been made from rye, peas, spelt, and rice. Onions, carrots, and herbs were added to the porridge pot to add taste and variety. Meat was added less often as it was not a common food for the vast majority of people. If it was used, bacon or other “lesser” cuts of meat were the norm. Milk and seasonal fruit were added, as were dried fruits when available. Wealthy people were more likely to use these. They were also more likely than peasants to have sugar or salt to flavor their porridge with. When made with extra spices, fruit, or honey, porridge was known as fummery or frumenty.

Porridge was not only a European food either. It has been cooked in Africa, Asia, and South America as well, using indigenous grains and seasonings. It’s made out of red beans in Korea and rice in China, for instance.

Since most medieval homes were one-room buildings with a single fireplace to cook over, the porridge was made in a pot for the evening meal. Most families had only one pot, so the leftovers were allowed to cool overnight and in the morning, were eaten either cold or were warmed up and supplemented with additional oats and seasonings. In places such as Scotland, porridge was poured into “drawers” or molds and allowed to cool into slabs, which were sliced and served cold or warmed over the fire.

Today, oatmeal is the main type of porridge eaten, although other varieties still exist. Cream of Wheat and grits are two other examples. The quicker the oatmeal cooks, the more refined the oats. One source claims that “Porridge purists reject the instant varieties for the traditional pan method, which involves stirring the oats with a wooden ‘spurtle’. There are some superstitious sorts who still claim that porridge should only be stirred using your right hand in a clockwise direction to ward off bad spirits.” Meat and vegetables are rarely added to modern porridges, but they are still sweetened with sugar or honey, and fruit and spices, such as cinnamon and raisons, are added.

To make frumente. Tak clene whete & braye yt wel in a morter tyl the holes gon of; sethe it til it breste in water. Nym it up & lat it cole. Tak good broth & swete mulk of kyn or of almand & tempere it therwith. Nym yelkys of eyren rawe & safroun & cast therinne. Messe it forth with venesoun or with fat motoun fresch. (The Medieval Cookbook.)