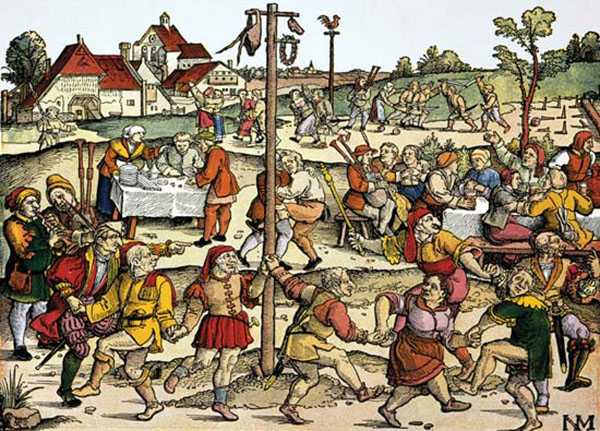 The medieval peasant is often believed to have led an idyllic existence, with a healthy country lifestyle, hearty food, and his own house and land.

However, the reality was often quite different. As in so many areas of medieval life, the lifestyle of a peasant, who lived in the countryside and made his living from the land, depended upon his own personal circumstances, the country in which he lived, and the size of his family. However, it is possible to speak broadly about the lifestyle of a peasant and learn more about the lives of ordinary country people in the Middle Ages

A Peasant’s House in the Middle Ages

A peasant’s house was typically built from wood, usually made from whatever wood was most common in the region. The house roof was thatched with straw and a sturdy oak door was in place at the front of the house to deter intruders.

The main feature of the house was a large fire set in the centre of the room. This was the hub of the home, a place to get warm after being outdoors, to cook food, chat to family and visitors and of course, the only source of heat, which had to warm the whole house in the winter months.

The house itself would seem quite dim to modern eyes, with the only light coming from the chimney hole and small unglazed shuttered windows. The room was furnished depending upon the resources of the family, but usually, a table, chairs, and a sleeping platform with blankets sufficed.

Cooking in a Medieval Peasant’s House

Although cooking could be done outside in fine weather, in winter, there was no option but to cook indoors in the main living area of the house; there was no separate kitchen compartment. A large cooking pot hung over the fire, holding whatever broth, porridge, stew or meat was the dish of the day. When resources were scarce, for example, in times of famine or just before a harvest when food stores were at their lowest, the same basic dish might be kept cooking in the pot day after day, with extra ingredients thrown in as and when obtained to refresh the pot.

Sleeping in a Medieval Peasant’s House

Early in the period, people tended to group around the fire in the main hall to sleep, sharing the warmth. However, towards the start of the eleventh century, there was a move towards the use of sleeping platforms, which separated sleepers from the rest of the house.

Most families of average status would have proper beds, with mattresses stuffed with straw or oats, a woollen blanket and sometimes even sheets made from linen. There are no toilet facilities, everyone had to go outside, whatever the time of day or night.

The style of living may seem quite basic, but life in a humble house in a rural area definitely had its advantages over life in the medieval town, often a place of dirt, disease and overcrowding.