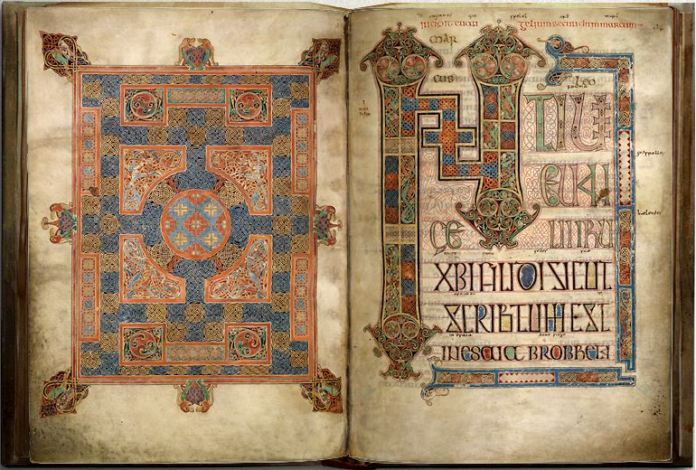 The Lindisfarne Gospels are an illustrated medieval manuscript created by a monk called Eadfrith who lived on the Island of Lindisfarne, England, in the eighth century.

The Gospels were created at Lindisfarne Priory by a monk living at the Island’s abbey. In the eighth century, when the Gospels were created, Christianity was in the process of becoming the dominant religion in the north of England. Already, Lindisfarne was established as a holy place, and home to the shrine of the revered Saint Cuthbert, who died in 687. Pilgrims visited the shrine regularly and it was reputed to be the site of miracles.

The Creation of the Lindisfarne Gospels

The Lindisfarne Gospels are a particularly important medieval manuscript because they were created by just one man, in contrast to the majority of manuscripts of the time, which were created by a team of scribes in a monastery’s scriptorium.

The Gospels are a work of art, highly illustrated with colours made using animal, vegetable and mineral pigments, which created rich, vivid shades. The opening pages of the Gospels are particularly striking, with elaborately patterned first letters, which have Anglo-Saxon designs.

A tenth-century inscription at the end of the Gospels states that the work was created in honour of God and St Cuthbert, by Eadfrith. A leather binding for the book was created by Eadfrith’s successor Ethelwald.

The Author of the Lindisfarne Gospels

The Gospels are believed to have been written by a monk called Eadfrith, who was Bishop of Lindisfarne between 698 and 721AD. Unusually, he worked along on the Gospels, and the work was left unfinished at his death in 721.

The work is made up of 250 pages of parchment of vellum, and the Gospels are presented in Latin, with a tenth century Anglo-Saxon translation written between the lines of the original work. Each Gospel is characterised by a detailed illustration of the relevant evangelist.

In working on the design of the Gospels, Eadfrith was influenced by the wide and varied cultural influences which existed in Northumbria during this turbulent period of its history. His work has echoes of Celtic, Roman, Anglo-Saxon, Roman and Eastern traditions, all of which had influenced the region’s history by this point.

Where are the Lindisfarne Gospels Kept?

The Lindisfarne Gospels are kept at the British Museum in London, England as part of the collection of Sir Robert Cotton. The Gospels are remarkably well preserved considering their age. Originally, the Gospels were used at Lindisfarne Priory and were covered by a highly-jewelled leather binding, made by Billfrith the Anchorite. This cover was lost during Viking raids on the Island and a replacement was made in the mid-nineteenth century. A modern facsimile copy of the Gospels can be seen at Durham Cathedral.