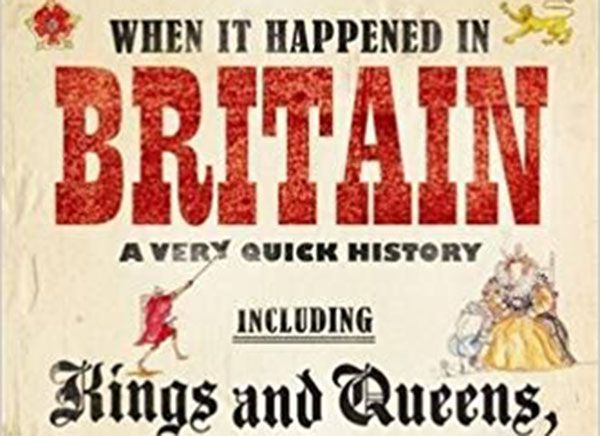 A tour through Britain’s history, from Roman times to the present day, with accounts of monarchs, plagues, battles, and the fascinating characters of the country’s past.

The book begins with the Julius Caesar’s invasion of Britain in 55BC, one of the major events in Britain’s early medieval history. Before the invasion, the Romans had already noted the country as an exporter of tin, slaves, hides and hunting dogs. But the invasion was to prove anything but easy.

Julius Caesar’s Invasion of Britain, 55BC

After the initial invasion, Caesar quickly left the country and returned a year later with reinforcements. The south-east of the country was the first to fall to Roman rule, but other tribes, particularly those in the north of Britain would prove harder to subdue.

The Romans occupied Britain, ruling from their capital at Colchester, gradually extending their influence further north and west. There were several serious rebellions, including that of Boudicca, a charismatic female leader who was able to gather an army of thousands, which defeated a whole Roman legion before its eventual surrender.

In 410AD, the Romans left Britain. But this was not to be the country’s last contact with Rome. Pope Gregory, impressed by some English slaves he saw in Rome, decided to send Augustine to convert Britain. Augustine arrived in Kent in 597AD, and founded Canterbury Cathedral. Over the next century, most British leaders, and then their families, converted to the Christian faith, which entered a golden age, particularly during the seventh century, with important figures such as Hild of Whitby and the Venerable Bede.

The Viking attack on Lindisfarne and further similar Norse attacks on other northern coastal monasteries ended this golden age, and although Christianity survived, it no longer flourished as it had in the northern monasteries such as Whitby and Lindisfarne, which had been known as great centres of learning.

The Norman Conquest, when William of Normandy defeated Harald Hardrada, his opponent for England’s throne, is one of the best-known dates in English history. It was followed by a period of relative stability, where the descendants of William ruled an increasingly prosperous country. The plague of 1348 killed an estimated third to a half of the country’s population and gave those who survived the chance to occupy and farm huge tracts of abandoned land.

The final part of the medieval section of the book deals with further disputes over the crown, with the Lancastrians and Yorkists pitched against each other in decades of civil war. The Battle of Bosworth, in 1485, saw claimant Henry Tudor gain the crown and become Henry VII, father of the famous King Henry VIII.

The rest of the book deals admirably with notable events of the next centuries, including the execution of Mary Queen of Scots in 1587, The Great Fire of London in 1666, the Act of Union in 1707, the Battle of Waterloo in 1815, and the Munich Crisis of 1938.

A well-written and entertaining book which presents important episodes in an accessible and easily-digested way. The author sets out the information clearly, writing about events and historical personalities in a lively manner. The information provided is just enough to stimulate the reader into finding out more about particular events of interest.

The Loneliness of Alexander the Great

Deterioration of the Soul