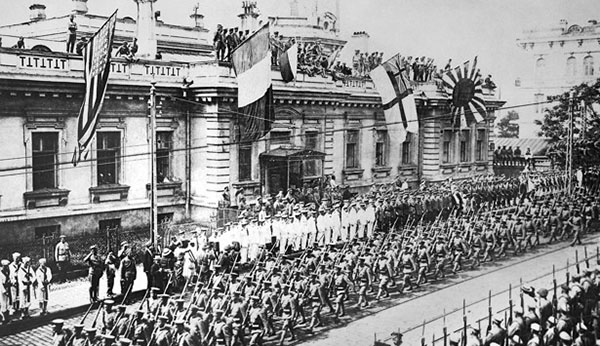 A bad war followed by a bad peace is the traditional view of the 1914-18 conflict and its aftermath. In some respects however it was neither of those things

In 1918 it was an American professor who showed great prescience by giving the 1914-18 war the description as ‘The First World War’. Until the outbreak of the Second World War the 1914-18 conflict was known as ‘The Great War’ and perhaps that is how it should still be referred.

Somehow ‘The Great War’ resonates in the mind rather more, conveying the meaning of a conflict quite of the ordinary and hitherto totally beyond the human experience. Lord Kitchener apart, few people in August 1914 had any reason to believe it would be a long war, far less one that would be fought on three continents and lead to the death of 9 million men.

Considering that not one of fourteen conflicts in mainland Europe over the previous hundred years had led to more than eleven months of continuous fighting – and in most cases peace came sooner – perhaps it is easier to understand the sanguine refrain that soldiers would be home ‘before the leaves have turned’.

From Britain’s point of view the war was hardly fought for ignoble reasons. They achieved most of their war aims by expelling the German army from Belgium and the occupied provinces of Europe. Not only did they prevent German hegemony over Europe they drew the curtain down on Kaiser Wilhelm II’s autocracy. Furthermore they developed the expertise in the new technology of war – aeroplanes, submarines and tanks – that would bring them success in Hitler’s war.

History might not have softened the judgement of the those Great War generals who, in John Keegan’s words, resembled ‘flinthearts bleeding the tender flesh of a generation to death in Flanders fields.’ But leaving aside officers who were either emotionally unfit or congenitally incompetent, those in command did come to terms with the nature of the war, albeit slowly.

By the same token the political legacy of the Great War has obscured the sense of renewal across much of Europe when peace came. A striking feature of the post-war years was the ability of European states to recover their strength. It seemed that the collapse of the old order, so much of it submerged in decay, had unleashed a tide of creativity. But as Keith Robbins wrote, the dramatic thrust of technological and scientific development did more than help Europe reassert itself …’it also carried with it the danger of …a further armed struggle for mastery.’

In the near century that has passed it has been periodically fashionable to view the Great War as a necessary war, a kind of catharsis to purge the European continent of its ailing and corrupt regimes. Whether our understanding of the war has reached the point that it no longer sounds absurd or immoral to describe it as ‘necessary war’ is open to doubt, however.