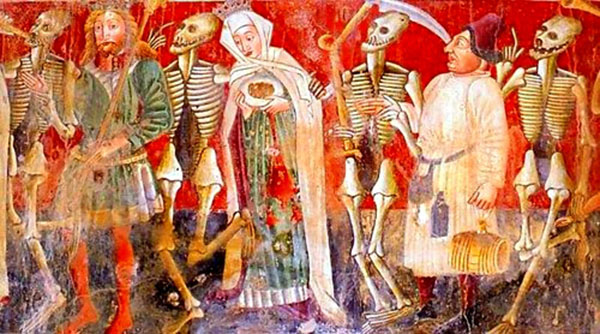 As the Plague devastated Europe, the symbol of personified Death served as a constant reminder of people’s mortality and life’s unpredictability.

Although the personification of Death as a “Grim Reaper” or “Angel of Death” had existed previously in various cultures, it was mainly following the devastating effects of the plague in Europe during the Renaissance that Death became personified and the Dance of Death (danse macabre) was depicted in paintings and images.

The Dance of Death as a symbol had its origin in France and was meant to serve as a general warning for people who sinned. Previously, it had been the strength and prowess of the hero and knight that had captured the imagination of the people; yet thereafter the force of death gained momentum because of the painful presence of death and destruction.

Death and the Consequences of the Plague

Death or Thanatos as a person was the unwanted and uninvited visitor who would catch people off guard and take them with him, separating them from their beloved, from their money and possessions, and from their homes. Death served as a constant reminder of mortality, of life’s fragility and unpredictability.

The Plague gave fodder to this dark and pessimistic philosophy as it relentlessly scourged the lands and left behind corpses in its wake. Although the claim that the dead outnumbered the living and that it was “scarcely possible to bury them” was exaggerated, it was a fact that various social customs had broken down and death was apparent and manifested itself everywhere. With the constant presence of death savage customs, such as cannibalism, lawlessness and anarchy, murder and witchcraft became more common.

What was the Plague and what were its Symptoms?

The Plague, at its most destructive point referred to as the Black Death, was a pandemic that swept across Europe in 1347-48. The pandemic is said to have wiped out a third of Europe’s population with a 55% mortality rate.

The Plague was a disease that was transmitted to humans by fleas and came in two forms, as the pneumonic and bubonic plague. The pneumonic Plague was the more lethal disease and it caused inflammation of the lungs. The bubonic Plague was accompanied by painful swellings usually in the groin or armpit areas.
Why is the Plague called the Black Death?

The term Black Death came from one of its most visible symptoms: the hemorrhage spots that accumulated in the body turned dark after death. As a result, the disease was believed to have connections and associations with evil supernatural powers and forces.

Apart from being highly contagious, the disease manifested itself quickly. Often death occurred within three days, yet in many cases it happened in a 24-hour period. Its sudden onset and its high level contagiousness made people paranoid and afraid of each other; many also believed that evil dark powers had been at work.

The Plague or “Black Death” not only brought about numerous visible cases of putrid death across Europe, but it was followed by a bleak pessimistic worldview and images of Death as a personified entity, a skeleton messenger to collect the souls of the dead. There were constant reminders of death anywhere people went in the desolated cities of Europe.