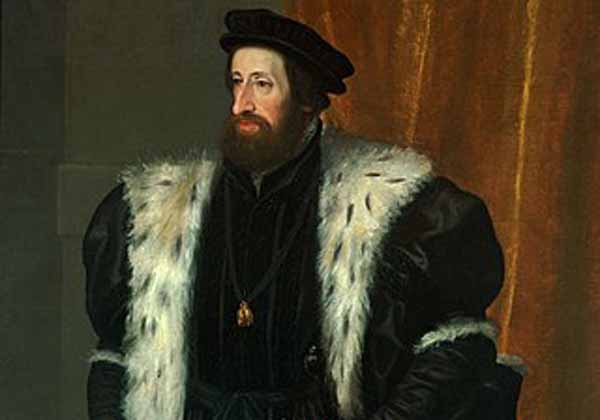 Emperor Ferdinand I of the Holy Roman Empire (1503–1564) established the Austrian branch of the Habsburg dynasty as inheritors of the imperial title. He grew up in the Spanish court of his grandfather King Ferdinand II of Aragon, but soon moved to the Habsburg Austrian lands where he became regent for his brother Emperor Charles V. His marriage to Princess Anna of Hungary helped him secure the lands of Hungary and Bohemia for the Habsburgs, and he soon became their king. Through negotiation and popular acclaim, he succeeded his brother as ruler of the Austrian lands and Holy Roman Emperor, establishing that his branch of the family would keep the imperial title.

The Spanish Childhood of Emperor Ferdinand I

After King Ferdinand II died, however, Charles naturally succeeded him as King Carlos I of Spain. The brothers had been raised apart in separate courts, and only met each other for the first time in 1517. A year later, Ferdinand graciously left Spain for Flanders, in order to make room for Charles as the new king of Spain.

The Marriage of Emperor Ferdinand I and Princess Anna of Hungary

In the meantime, Emperor Maximilian I had been arranging Ferdinand’s marriage to Princess Anna of Hungary. He had been promised to her as part of a peace treaty in 1507, but because Ferdinand was raised so far away he and Anna didn’t meet and have a formal wedding until 1521, when Ferdinand finally arrived in Vienna. He also became regent for his brother Charles, who in 1519 had become Emperor Charles V of the Holy Roman Empire and ruler of the Habsburg Austrian lands.

Ferdinand and Anna had a happy, fruitful marriage that lasted until Anna’s death twenty-six years later. He was a faithful husband, and Anna bore them fifteen children, twelve of whom survived to adulthood. They had three sons — the future Emperor Maximilian II, Ferdinand of Tyrol, and Charles of Styria, whose own son became emperor after Maximilian II’s line died out.

King Ferdinand of Hungary and Bohemia

As well as being regent of the German lands of his brother, Ferdinand also soon became king of Hungary and Bohemia, neighboring lands. Years before, Emperor Maximilian I and King Ladislaus II of Hungary, Anna’s father, had agreed that if Hungary didn’t have a male heir, then the Habsburgs would inherit the land. In 1526, Ferdinand’s brother-in-law Louis was killed in the Battle of Mohacs, and Ferdinand thus inherited the land and was subsequently elected king of Hungary and Bohemia.

King Ferdinand was a good administrator and soon became a popular ruler in his lands. He had been trained by humanists and his grandfather King Ferdinand II, and was more tolerant and flexible than his brother Charles.

As King Ferdinand grew in power and popularity in his German lands while Emperor Charles V had to travel often between his dual empire of Spain and the Holy Roman Empire, it was only natural that Ferdinand should want to keep the Austrian lands for himself and his heirs. In 1522 Charles had, by private agreement, given the Austrian lands to Ferdinand and his descendants, but publicly Ferdinand remained just his brother’s regent. Furthermore, Ferdinand had been elected King of the Romans, making him heir to the Holy Roman Emperor, in 1531.

While Emperor Charles V was happy to have his brother succeed him as Holy Roman Emperor, the problem lay in whose son would then succeed Ferdinand. Charles wanted his son Felipe (the future King Felipe II of Spain), while Ferdinand wanted his own son Maximilian to succeed him. The electors in the Holy Roman Empire favored both Ferdinand and Maximilian as the next emperors.

Ultimately, Ferdinand succeeded his brother and the imperial title stayed in his branch of the family. Emperor Charles V of the Holy Roman Empire retired from his exhausting reign in 1556, officially leaving his Austrian holdings to his brother Ferdinand, who was formally crowned Emperor Ferdinand I of the Holy Roman Empire in 1558. He was succeeded after his death without controversy by his son Emperor Maximilian II.

By making sure that his son succeeded him as Holy Roman Emperor, Emperor Ferdinand I established that the imperial title would stay with the Austrian Habsburgs, rather than going back to the Spanish Habsburgs of Emperor Charles V’s descendants. Emperor Ferdinand I also increased the Habsburg land holdings by inheriting Hungary and Bohemia. His eldest son Emperor Maximilian II was then able to inherit lands and titles and keep them with the Austrian Habsburgs.