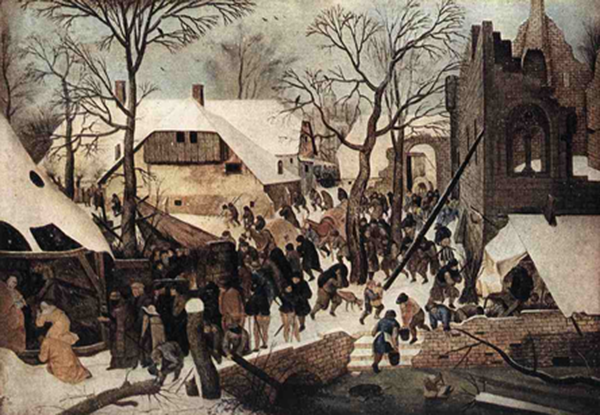 The Christmas of the Middle Ages combined a rich mixture of secular, pagan Druid customs with the evolving religious Christian traditions.

The Christmas celebrations of medieval times included roaring fires, Yule logs, and boar’s head on a platter. Many of our modern traditions originated from that time with holly and mistletoe, and carolers going door to door.

The first reference to “Christes Maesse” can be found in Saxon literature in 1038 in reference to a festival of Christ. In the early middle ages, it was not a time of cheer, but a time for church attendance and somber prayer.

William the Conqueror was crowned on December 25, 1066 in Westminster Abbey. During the coronation, the people began cheering inside the abbey and the noise alerted the guards outside to think that the people were attacking the new king. The guards ran inside to aid the king and a riot ensued with many people killed and their houses burned to the ground.

December 25th wasn’t the most important date during this time. Epiphany, which fell on January 6th and was also known as Twelfth Night, was a more joyous festival which celebrated the baptism of Christ and/or the arrival of the Magi with gifts.

Candlemas, also known as the Feast of the Purification of the Virgin, came each year on February 2. At this time, the parishioners came to the church with a penny and a candle to be blessed for their homes.

It wasn’t always a fun time for the kids. The Feast of the Holy Innocents was celebrated on December 28 with the terrified children hiding in the barns or any place else they could find for they would be beaten when their parents discovered them. The dubious celebration was to remind them of Herod’s cruelty for killing the first born children as he searched for the new-born king.

This was a hold-over from the pagan Roman festival of Saturnalia. The Lord of Misrule was appointed from among the peasantry usually for a day and all the rules of life were turned upside-down. Anything could happen.

The Lord of Misrule could demand that anyone do anything. The priests might get rowdy, sing lewd songs and get drunk. The townsfolk could eat at the altar in the church, dance and sing. Sometimes the nobility had to hire guards for protection on that day.

Druids celebrated the annual and seasonal turning of the “Wheel.” Theirs was a nature religion which recognized each season as a celebration. Their winter celebration was on December 21 with the winter solstice which came with the shortest day and the longest night of the year.

Each year the Druids chose a huge log for yule to represent the coming year. The priests blessed it and kept it burning for 12 days continuously. On the last day, they saved part of it to light the next yule log for the following year.

The pagan Druids of Britain venerated the oak for its special powers. It promised the return of life in spring. The Vikings decorated fir and ash trees for good luck in battle and the Christians hung apples from the trees on Christmas Eve. Because of the symbology of the apples, the Christians had another name for that particular day–“Adam and Eve Day.”

In 16th century Germany, residents found a fir tree each year, cut it down and decorated it with paper flowers before carrying it through the streets to the town square on Christmas Eve. They enjoyed a huge feast, danced around the tree and then burned it.

The Druids revered holly, mistletoe and ivy. They believed that the holly was home to good spirits and fairies, and that the red berries represented the menstrual blood of the Goddess whom they worshiped. The Christians had another view of holly berries. They thought the berries were white until the blood of Christ turned them red when he wore a crown of thorns.

The Romans associated ivy with Bacchus, the god of wine. Because of this the church would not allow ivy to be used as a decoration until later during the “burning times” of the middle ages when they were searching out witches and burning them at the stake. Their superstition was that it would help them identify witches and protect them against the black plague as well.

Most of the entertainment in the forms of drama, games or music fell within the realm of the Church as some form of religious expression. Since it was Christmas, an interest in the nativity and the holy family as liturgical drama was predominant and continued to grow as the Church recognized Christmas as a holiday.

The early Church discouraged carols and caroling, but with time, it came to accept the custom. By the late Medieval Period, caroling was a well-accepted tradition.

This was the best part of the holidays for most people. For most of the Medieval Period, the people were habitually hungry and poor. The Christmas festivals offered some relief for them. Some of the nobles and lords of the manors fed the peasants but that was not always a common practice.

Wassail was a strong, hot drink consisting of ale, honey and spices in a heady mix which was served out of a large bowl. The host would greet his friends with “waes hael” which meant “be well” and they replied with “drinc hael” or “drink and be well.”

Mince pies contained shredded or minced meat baked in oblong dishes which represented the baby Jesus’ crib and the ingredients had to include three spices (cinnamon, cloves and nutmeg) to represent the gifts from the Magi.

Peacock was often served as a roasted bird which decorated the banquet table. After killing the bird, the cooks skinned it with the feathers intact. After roasting it, they redressed the bird in its skin and served it.

Humble pie (‘umble pie) was baked from the “humbles” of a deer. It consisted of the heart, liver, brains and entrails of the animal. This might be the source of the phrase, “to eat humble pie.”

Everyone enjoyed the Christmas season for it gave them a chance to spend time and have fun with friends and family. They cleaned their houses and decorated with holly, mistletoe, and evergreen wreaths. Not only that but there were huge banquets and everyone could eat their fill for once in the year and drive away the constant hunger.

The series of festivals ended with Epiphany and then all was back to normal once more. The peasants worked the 7-day week from dawn to dark each day. There were no weekends, and there would be no more long holidays until the next Christmas.

Christmas, as a holiday, would undergo more changes during the Tudor Dynasty in the 16th century.