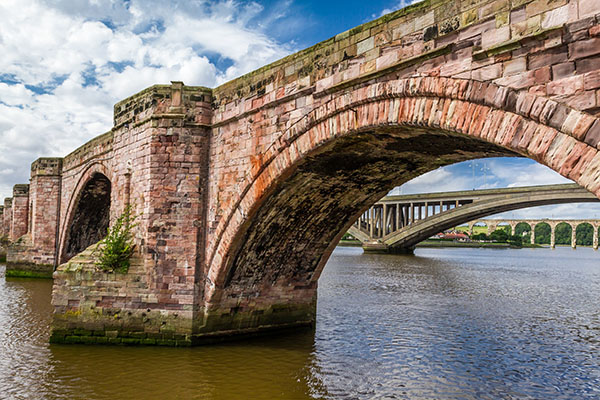 After the overspends and overruns, the bridge had to be completed oin a fixed term contract. Would this solve or exacerbate the problems?

The Bishop of Durham, Richard Neile, had an obligation to the Privy Council and to the King to ensure that Berwick Bridge was completed on time and within budget. Given that he also had his religious duties to fulfil, he engaged Newcastle Bridge Master, John Johnson, to stay in Berwick and oversee the work. It was so important to the Bishop that he paid Johnson out of his own pocket.

Since 1611, work had progressed slowly in the short building seasons and one arch per year was the approximate aggregate outcome. In 1621, with a new payment method rewarding completion, five arches were built in a few months. We do not know whether the bridge was passable by Midsummer Day as required, but it was open by Michaelmas, close to the autumn equinox and the traditional start of autumn.

Down Came the Rain

Scott’s History records the deluge unleashed over Berwick and the Tweed Valleys in October 1621, describing the abundance of rain and storms that flooded the north parts worse than in anyone’s living memory. He relates how the Tweed carried an away an abundance of haystacks, corn and timber, all of which headed for Berwick, its decaying timber bridge and its new stone bridge on much of which the mortar had not yet hardened and the centering was still in place.

It seems that the old timber bridge trapped and held the flotsam. The pressure of the water dammed behind the old bridge built until its old timbers could stand no longer. It burst and unleashed a debris-laden wall of water against the soft-centred stone bridge. In a short while the whole year’s work was destroyed. The arches built earlier, at a more modest pace, all survived.

There is no record of the reactions of Richard Neile and John Johnson to the calamitous collapse of the hastily finished bridge, neither are they mentioned among those who had to clear up the mess and rebuild the bridge. James Burrell and Lancelot Branxton would have been liable if the bridge had collapsed during the winter of 1620 – 21, but seemingly not at this time.

On 25th June 1622, a new Warrant was issued to the Mayor, bailiffs and Burgesses of Berwick for £3,000 (£288,000 today) to finish the bridge and apply any excess to the building of a replacement for Berwick’s dilapidated church, something that had been very close to the Earl of Dunbar’s heart had he survived. Berwick’s pragmatists had already started salvage and rebuilding and the bridge opened to traffic in 1624, with the paving and walls were completed thereafter. The accounts were not finalised until 1634, mistakenly recorded by some as the completion date of the bridge.

James Burrell was buried in Berwick Churchyard on 20th January 1631, while the dilapidated old church still stood. In 1641, King Charles I provided money for the church to be rebuilt, but the Civil War broke out and the work did not proceed. The church was finally rebuilt between 1650 – 52, while The Commonwealth still existed, so its architecture was unconventional, lacking a tower or spire. Although it has undergone changes, Berwick’s Church of the Holy Trinity remains noticeably different from other Anglican churches.

When building started, it is understood that the church was re-sited, which is of no significance unless you want to look for James Burrell’s grave and memorial. One of Berwick’s greatest benefactors, its Surveyor and pioneering bridge builder, disappeared somewhere under the rebuilt church. On my most recent visits, I have scoured Berwick to find any trace that it recognises and appreciates James Burrell’s contribution to the town’s history, sadly without success.

Berwick now has three bridges across the Tweed, with James Burrell’s, known as ‘The Old Bridge’, closest to the sea. It is a long, low graceful, even beautiful, pink sandstone Grade 1 Listed Structure and a Scheduled Ancient Monument. Including its landstalls, it measures 1,164 feet long and is 17 feet wide. Above each column, the parapets are shaped to provide what might once have been passing places and now refuges for foot passengers. Despite all the confusion about how many arches it should have had, it ended with fifteen and long after its construction ended, it remained the longest stone bridge in the British Isles. It still carries daily southbound traffic after almost four hundred years.

Perhaps before the bridge’s four hundredth anniversary, hopefully in 2024, it might be graced by a commemorative plaque of pink sandstone from Tweedmouth, engraved to pay tribute to all the benefactors who contributed to this fine bridge. The list might include King James I, Home, Percy, Greville, Bowyer, Neile, Branxton and Richardson, but above all, James Burrell, Bridge Master, visionary and the man who opened up Berwick to the world.