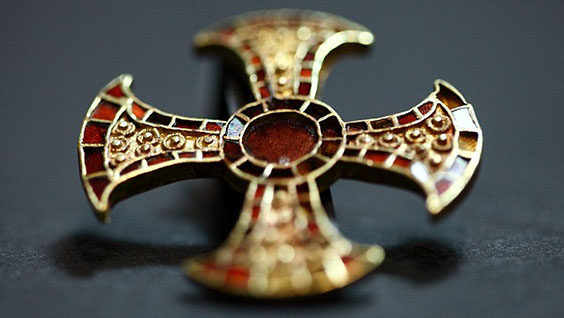 Imagine if you will a loyal Saxon warrior on his knees in prayer, to the goddess of the harvest for plentiful food or to the god of the sky for good weather on the day of a battle. Get the picture?

Germanic religion was based on a belief system that had gods and goddesses in charge of different parts of humans’ daily lives. If you wanted strength in battle, you prayed to a war god. If you wanted your crops to grow plenty of food to feed your large family and/or retinue, then you prayed to the goddess of the harvest.

To the Saxons and the other Germanic peoples living in England in the years between the Roman Exodus and the wholesale conversion to Christianity, the gods had the power to influence material matters and the outcome of events. By huge contrast, the Christian God (all one of Him) focused more on matters of the spirit and the heart.

Such a contrast could not have been more stark. Convincing such believers in “paganism” must have been extremely difficult for the monks and missionaries like Augustine and Columba. It surely was a hard sell when you couldnt really offer an answer to a question like this: “So what will this Christian god do to protect me in battle?”

They are, admittedly, two vastly different belief systems. If you are schooled from an early age to pray to Thor, asking him to bless your axe and sword and shield and helmet, then you might be a little dumbfounded when presented with the Christian God, who, through his messenger Jesus, asks you to “turn the other cheek.” You might also be confused to learn that Christianity has no goddess of the harvest. To such a question as, “Who will look after my crops?” a Christian monk might very well have said, “Why, you will, of course.” Somehow, it wasn’t quite the same.

So what is a loyal Saxon warrior to do? Be skeptical. A great many of them were. Even when their king converted to Christianity, as Ethelbert of Kent did, it often took awhile for his warriors to fall in line. The story of the loaves and the fishes is all well and good, but the goddess of the harvest and her promise to protect her people somehow seemed more comforting.