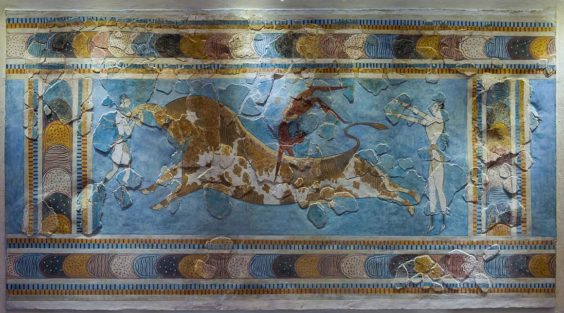 The Minoans were an influential civilization that thrived on small islands in the Aegean Sea between 3000-1500 B.C.

The Minoans were a peaceful trade civilization that developed on and around the island of Crete beginning around 3000 B.C. This highly influential culture is widely considered to be the foundation of European civilization. They enjoyed great success as merchants, developed the most advanced sea trade fleet known to date, were a leisure and art-loving culture, and were able to benefit from all of this without ever knowing one major military conflict.

The island of Crete, located between Asia Minor and Greece in the Aegean Sea, was first settled around 3000 B.C. by people migrated from Asia Minor. Crete had very fertile soil, but little else in the way of resources. In order to survive as a society, they developed trade with neighboring island and mainland cultures. They exported wine, oil, and jewelry, and imported other raw resources and foodstuffs. Out of necessity, they constructed the world’s first major fleet of ships.

The Minoan naval fleet was developed solely for trade and commerce, rather than warfare. The ships were large and appeared to have had the capability for defense against pirates and other types of bandits. With these ships, the Minoans were able to trade with such cultures as Egypt and mainland Europe.

Because of the isolation of the island of Crete, the Minoans were pretty secured from the turmoil of many mainland cultures, such as those in the Middle East. Also, the smaller size of the island kept land-hungry conquerors from being too interested. Because of this fortune, the Minoans didn’t expend their money on military pursuits, and their cultural and technological advances grew vastly.

The Minoans were able to take their wealth and construct grand palace centers on Crete and the surrounding islands they inhabited. These palaces were multi-room houses that were the first of their kind. The multi-room building was not solely enjoyed by nobility, even the poorer Minoans were able to utilize them. It is thought that the Minoans developed indoor plumbing for these complexes (which was not seen again for hundreds of years after the fall of the Minoan culture).

The Minoan culture was considered a bureaucratic monarchy. There was a king, who ran the government like a business, and ran it out of the palace. Alongside him was a bevy of administrators and scribes, who assisted him in the strict regulation of commerce and business affairs. The Minoans recorded all of their business records in minute detail on clay tablets, using their written language known to us as “Linear A”. Linear A is thought to have been influenced by Egyptian Hieroglyphics, and has not yet been fully decoded by scholars.

The Minoans enjoyed a lifestyle filled with sports and leisure activities, enjoyed by men and women alike. These sports included boxing and bull jumping, depictions of which are found on numerous works of Minoan art. It seems that while the Minoans worked very hard to build a successful commercial empire, they also worked very hard to enjoy the fruits of their labor.

In addition to their advances in architecture, the Minoans seemed to have greatly appreciated art. While the art of the Minoans depicted their life, much like subsequent Classical civilizations, it seems to have been executed for the sheer pleasure of looking at it and enjoying it. Unlike later Greek cultures and the Romans, Minoan art did not have political or religious implications. It seems to have been just another facet of their leisurely lifestyle.

The Minoan civilization prospered for 500 years. The end came when a series of earthquakes took out the city centers around 1500 B.C., likely caused by a massive volcanic eruption on the island of Thera. This series of disasters severely weakened the Minoans, and they were eventually conquered by the Mycenaeans (who had been greatly influenced by the Minoans), a culture on mainland Greece.

Everything that scholars know about the Minoans is largely speculation, because of the lack of decipherable records available to them. However, a great deal of archaeological evidence from sites such as Knossos and Phaistos, and from Minoan artifacts uncovered in Egypt and throughout Europe, allow scholars to piece together this mysterious civilization, one that heavily influenced the cultures around it, even the one that eventually conquered it.