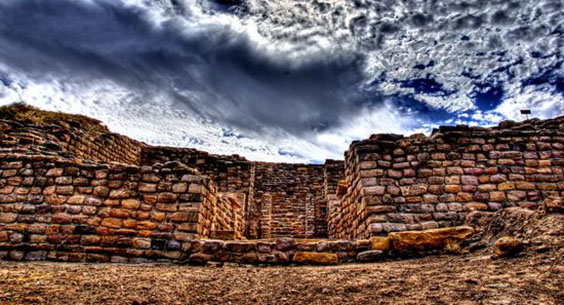 Early in the 2nd millennium B.C.E., a series of disasters, or perhaps one cataclysmic event, may have brought an end to the thriving Indus-Saraswati River Valley Culture.

For hundreds of years, the Harrapan Civilization thrived in what is today northern India, Pakistan and parts of Afghanistan. From ca. 2600-1900 B.C.E, the cities of Harrapa and Mohenjo-Daru, along with thousands of smaller towns, developed into a society that became as sophisticated, and in some ways even more so, than their western neighbors in Sumeria, Syria and Egypt.

Unlike these corresponding western cultures, around 1900 B.C.E. the Harrapan Civilization disintegrated. Great cities emptied, and the people disbursed into isolated towns, or they simply moved further east to merge with the cultures in the Ganges region. Scholars have begun to reject old theories that an invasion of the Aryans into the subcontinent was the cause of this dispersal.

There is currently no historical or archaeological record which shows that the Aryan people ever invaded the region. A violent end of the Harrapan culture would presumably have left some remains of the conflict in the region but, as yet, nothing has been found. Instead, there is reason to believe that the people of the Indus-Saraswati Valley were largely peaceful and relied upon river-born commerce to maintain their way of life.

The Evidence Of Natural Disaster

The written record left by the Harrapans breaks off dramatically as the culture neared its end. This ancient language is as yet not deciphered, so it is impossible to know exactly why its use diminished as the society fell apart. In other cultures, the decline in the use of writing and in record keeping has often been seen as a sign of a series of prolonged natural disasters.

The most common held theory used to explain the decline of the Harrapan culture is that climatic changes lead to a long term drought. This environmental disaster, coupled with repeated floods that devastated the arable land, would have been followed by famine and pestilence. The result would have been a natural migration of many people out of the region. This would explain the steady decline in the use of writing and trading seals, as well as the increasing isolation of those population centers that remained.

The Possibility Of An Ancient Tsunami

In C.E. 2001, on India’s Republic Day, a massive earthquake devastated the Kutch region. Based on the evidence gathered from studying this earthquake, some geophysicists have begun to theorize that such a disaster could have been responsible for the end of Harrapan civilization. This theory is based upon the premise that a massive wave could have reached inland, traveling up the Indus and Saraswati Rivers simultaneously. This massive inundation would have flooded the area, as well as shifted the course of the Saraswati so much so that it eventually dried up completely. Any survivors of such a disaster would have had little choice but to abandon much of the devastated region and its now isolated communities.

However, some of the circumstances surrounding the fall of this ancient culture are no longer entirely reliant on theory. The geological record does show that the Saraswati River, one of the main arteries of trade for the Harrapans, dried up completely sometime during the early 20th century B.C.E.

Regardless of the cause, this change in the local geography would have been enough, in itself, to cripple the river based society since it was the rivers, and the barge traffic that used them as trade routes, which united the thousands of towns and cities. Commerce would have gradually ground to a halt as ports became inaccessible, and new methods of surviving, including evacuating the area, would have become necessary.

If, following any of these disasters, the surviving people moved east in large numbers, as has been suggested, then they must also have developed new artistic styles for their pottery and other wares. By doing this, and by adopting other customs found in the lands they settled, the Harrapan people managed to blend in so completely with neighboring societies that their culture vanished from history.