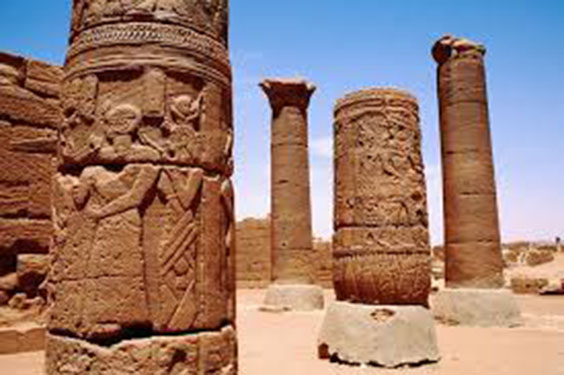 The Ancient Civilization of Kush existed 2,350 years. During that time they lost and regained power from Egypt and eventually established an extensive trading network.

South of Egypt, along the Nile River Valley, the ancient civilization of Kush existed from about 2000 B.C. to 350 A.D. The first settlers to arrive in the Northeast region of Africa in 3500 B.C., in the lands known as Nubia, were among Egypt’s first neighbors. Over time, these neighbors would be peaceful trading partners and strong rivals.

The early Nubians were attracted to the Nile River Valley because of its fertile soil and natural resources of gold, copper, and stone. The Nile River flooded each year, leaving behind rich deposits of silt, which contributed to the abundant farm lands. Crops grown in the area were wheat, barley, and other grains, and cattle also grazed in the tall grasses of the Nile River Valley.

The Ancient Civilization of Kush

Because of abundant winter and summer crops, some farmers became very wealthy and powerful. Leaders and natural rulers began to emerge within farming villages. One strong ruler, in one of Nubia’s farming villages, took control of all neighboring villages and pronounced himself king of all Nubian lands. As a result, the new Kingdom of Kush came into being around 2000 B.C.

The first Capital of Kush was Kerma, which was just south of a stretch of Cataracts on the Nile River. These cataracts provided a natural barrier against attack, and so the kingdom thrived. As this culture became more diverse, people began to take on more complex roles in society such as that of priests and artisans.

Egypt and Kush were neighbors, and sometimes they had peaceful trading relationships, and other times they were enemies. Kush was a steady supplier of slaves, gold, copper, ebony, ivory and stone to Egypt. They provided these goods to Egypt as a means of keeping the peace with the Egyptian pharaohs and to avoid being attacked. However, this arrangement would soon fall apart.

Kush was becoming very wealthy from trade, and the Egyptian Pharaoh and priests felt that Kush was becoming too powerful. So, around 1500 B.C., the pharaoh Thutmose I sent an army to take control of Kush. The Egyptian army conquered all of the lands of Nubia, and destroyed the Kushite Capital at Kerma. Later Egyptian pharaohs like Ramses the Great built temples and monuments in what were once lands belonging to Kush.

Egypt controlled the lands of Kush for 450 years. During this time, many Egyptians moved into the lands of Kush, and soon the Egyptian culture had a dominating influence over the people of Kush. Kushites began to wear Egyptian style clothing, they worshipped Egyptian gods, and Egyptian became the official language of the land.

However, after a series of wars and weak pharaohs, the New Kingdom of Egypt began to loose power in the mid 1000’s B.C., Kush leaders saw this as their opportunity to regain their power from the once oppressive Egyptian Kingdoms.

By about 850 B.C. Kush was once again becoming a strong and powerful kingdom. Around 700 B.C., The Kushite King Kashta sent armies to invade and conquer Egypt around 751 B.C. A new capital was established 100 miles south of Kerma along the Nile River in the city of Napata.

After Kashta died, his son Piankhi became the ruler of Kush. He was known for his military might and deep religious views. Piankhi felt that the Gods wanted him to rule all of Egypt, and he fought fiercely to accomplish this task. By the time of his death in 716 B.C., Piankhi had control of all lands along the Nile River Valley from Napata to the Nile River Delta.

After Piankhi died in 716 B.C., his son Shabaka took control of the lands and declared himself a pharaoh; hence, creating the twenty-fifth Kushite Dynasty in Egypt.

Shabaka revived some earlier Egyptian cultural practices that had faded during Egypt’s period of weakness. For instance, Shabaka was buried in an Egyptian-style pyramid despite the fact that the Egyptians had stopped building pyramids centuries earlier. He also preserved Egyptian writing, restored old temples, and built new temples to Egyptian gods.

The Kushite Dynasty remained strong for 40 years, until around 640 B.C., the Assyrians from Mesopotamia, with their strong iron weapons, pushed the Kushites out of the lands that once belonged to Egypt. This ended the Kushite rule over Egypt.