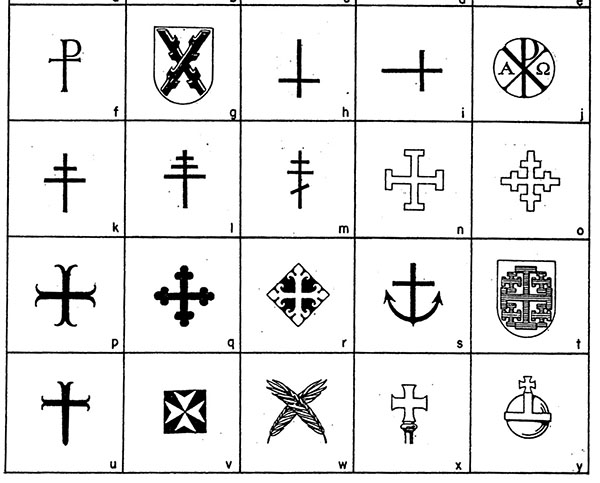 One of the oldest and most widely recognized symbols on the planet, the cross predates Christianity by at least two millenniums. What is its origin?

For centuries Christendom has promoted the cross as a symbol of the death of Jesus. There’s only one problem with that – the symbol is older than Christianity – much, much older.

If the cross predates Christianity then its meaning must also. Just how far back does it go and what is its original meaning?

Dating the Earliest Forms of the Cross

It seems the most ancient of these are the equal-armed cross (+), the solar cross (a plus symbol inside a circle or sun symbol), the swastika (a form of solar cross), and the Tau or T-shaped cross (said to be the “basis for the Egyptian ankh”). All of these probably date back to somewhere between 2182 and 2100 and were definitely already in use by 1613 BCE.

The Cross of Four

What did these most ancient forms represent and why were they used? If you check an Encyclopedia of symbols you’ll find a lot of naturalistic explanations such as ‘the four elements, the four winds, the four directions of the compass,’ or ‘the four phases of the moon’. But could it be that these nature based relationships were made to serve as reminders of something with a much deeper meaning? Could the worship of natural objects and cycles be a proxy for the worship of something else?

The equal-armed cross is “an old ideogram from most cultures found in every part of the world”. Even without the solar disk it is “associated with the sun and power”. Its four arms or cardinal points highlight the fact that “the cross is closely linked to the symbolism of four”. Later crosses were adapted to emphasize a triad. Other modifications include adding a circle, sun rays emanating from the cross, or a flame to emphasize its link to the sun god and to fire worship.

The gods of various cultures and ages can be linked by noting like customs, festivals, symbolism, depictions, and etymology of names. Also by comparing mythologies and the comments of ancient historians, the Bible, and other sources, much has been learned about how these systems evolved.

You may not recognize any of the names above, but how about these: Saturn, Apollo, Zeus, Jupiter, Isis, Venus, Aphrodite, Mary… All of these names can be traced back to Ham, his son Cush, his son Nimrod, and his wife Semiramis.

Nimrod or Ninus (meaning “the Son”), is the first king listed in the most ancient Assyrian-Babylonian king lists, making his wife the first queen. Of the four, Nimrod was first to be deified, hailed as “the seed” or messiah, and worshiped via the sun. His connection with the sun may have been inherited from Ham, whose name meant “burnt” or “burning one”. Later, after the deification of Semiramis, he also came to be worshiped as “the Son” of the Great Goddess Mother, the Divine Mother, and the Queen of Heaven.

Cush is said to have founded Babylon as Bel while his son built the city. There is also evidence that Semiramis, being the “first deified woman”was the archetypal mother goddess, as alluded to above. She became the Virgin Mary via the cult of a South American fertility goddess. Or, it might better be said, the Virgin Mary became her.

Although said to symbolize “the Holy Trinity,” there is good reason to believe that one arm of the Latin cross represents, not the Holy Spirit, but the original Goddess Mother in the form of The Divine Mother Mary.

Among the proofs of this is the Marian cross, which is a papal cross and looks like the Latin cross but with the rightmost arm extended and a large “M” beneath it. Remember now that even the oldest crosses combined the male and female principle. So the secret inclusion of Mary within the symbol (blatantly illustrated in the Marian cross) should come as no surprise, with the male principle represented by the vertical arm of “the Son,” Ninus.

The leftmost arm, I suspect, may represent Cush, but I know of no evidence of this. Hislop states that, even in early Babylon, “the first person in the godhead was practically overlooked” while the worship of the mother/son prevailed and spread. The original triad may have been initially based on the three rebels involved in the diabolic plot outlined in Genesis, for there is evidence to connect Semiramis with the mother of all, Eve.

The Seed and Sun

The ancient pagans were well aware of that original prophecy, later recorded in Genesis, about the ‘seed of a woman’ who would slay the serpent; it was even incorporated in the symbol of the sun disk. In Chaldee zero, or “O”, meant zero just as it does today; but it also meant “the seed.” So the circular symbol of the sun also signified “the seed,” who they deemed to be the Ninus or “the Son” of the woman Semiramis. This duality of meanings allowed the idolatrous system to function secretly alongside the patriarchal system, which rested primarily on Noah.

A Pervasive Religious and Political Symbol

In the late 3rd or early 2nd millennium when these cross symbols began to be used, the gods and goddesses they represented had recently been political rulers; so there was no separation of church and state. Hence, these symbols had political as well as religious meaning. Later kings were thought of as gods because they had descended from, or received authority from, people who had already been deified; so lineage became important to royalty. This is in fact, why “many cultures and their rulers claimed ancestry from the sun”.

Even today cross symbols commonly appear on the flags of many nations such as the United Kingdom, Switzerland, and others.

It shouldn’t be too surprising that cross forms are just old symbols representing deified and dead ancestors. Ancestor worship has been common throughout mankind’s history and is still practiced today in some cultures.

What is amazing is that this symbol, in its many forms, has lasted so long and spread so far. As also that its meanings have remained, for the most part, secret and disguised.

In this day and age when virtually everything seems advanced, enlightened, and modern, it’s odd to think that little has changed; it’s just called by different names.