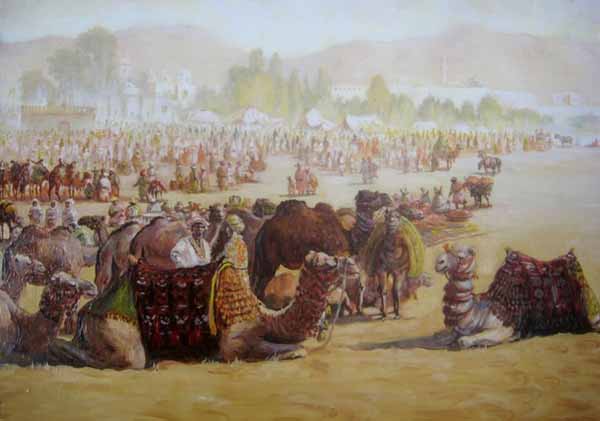 Caravans crawled across the Silk Road buying, selling, and transporting culture from Rome to Chang’an for two thousand years.

The indelible image of a caravan stretching across the dunes conjures unknown horizons in our imaginations. The Silk Road was the arterial system that linked remote civilizations and great empires to one another. Its routes contended with vast distances, towering mountain ranges, and hostile deserts. The logistics and expertise required for a successful expedition were sophisticated and ancient. A 20th century caravan would employ many similar animals, methods, and materiel as its second century CE counterpart.

The Significance of Silk Road merchants

Merchants of all nationalities traveled beyond their horizons. They were the beasts of burden that transported raw materials and manufactured goods from point to point at great cost and risk to themselves. The merchant class of the ancient world forged maps, wrote guides, and helped establish international standards of trade. They were prolific translators of secular and religious texts, and they established safe routes for generations of traders and travelers to follow.

Their collective knowledge of the land and their closely guarded trade secrets were shared from father to son for centuries. That information eventually found its way into journals, manuals and other rare documents that have shed some light on their advanced skills in navigation.

The Composition of a Caravan

The undisputed leader of a caravan is, in Turkic languages, called the bash. He achieved his station only after spending many years on the trade routes, learning every path in the land, and the dialects of the cities in his region. He cultivated an expertise on shipping any type of cargo.

In Central Asia the two-hump Bactrian camel was the beast of choice. The Bactrian camel can carry a load of 300 to 500 pounds. Their fortitude to extreme conditions made them the perfect animal for the job. Trained and experienced camels were valued above many other commodities in the market.

Horses and mules also played an important role. An expedition required them by the hundreds. The size of a caravan varied from the small (12 to 50 camels), to the average (75 to 200), or to the massive (500 to 2,000 camels). The number of horses and mules would nearly double.

The Business of the Silk Road

A caravan was an expensive venture. They were financed by guilds, houses of royal families, or by a regent. Only the wealthiest merchants afforded private caravans.

Many caravans operated within the boundaries of a region, repeating a circuit of routes with regular destinations and a seasonal schedule. They paid taxes and license fees to the local shah, khan, or king for permission to conduct business.

The long distance caravans were usually larger and due to exorbitant costs; sponsored. Weather conditions and the ephemeral stability of Silk Road rulers dictated the itinerary of long distance journeys. These epic expeditions were usually diplomatic, and included a return trip home.

A merchant needed to obtain authorization in advance from the government of the destination kingdom, as well as the permission of local regent. Ambassadors making the journey from Samarkand to Chang’an, for example, could only do so if they received an amulet from the imperial court of China as an invitation. The amulet was one half of a piece, or the tailpiece. The court possessed the other half, or the headpiece. A schedule was imposed on the caravan, stating a specific month of arrival and a specific destination city.

Danger on the Silk Road

A caravan faced many dangers depending on region: bandits, weather, animals, geographic obstacles, and malicious despots. Many expeditions hired armed escort in the form of light cavalry. The size of the escort would be proportionate to the value of the cargo and the budget. There could be anywhere from 10 to 1,000 armed riders. Security was very expensive, but an essential investment.

Animals, more than bandits, proved to be the largest threat. Bandits still preyed upon victims across the vast desolate expanses. Sand storms would confuse caravans, many were swallowed by the vast Gobi and Taklamakan deserts. Individual travelers often joined a caravan. Traveling over mountain passes at 18,000-feet, or navigating 350 miles of open desert was a death sentence for any single person. Traveling in numbers with an experienced guide was the difference between life and death.