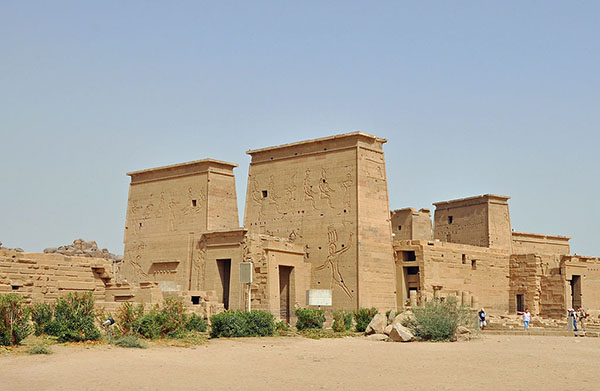 Henges comprise a circle of standing stones, or a simple ditch and bank. Matt Reynolds and Steve Platt, write in “Henge Monuments” on Channel 4’s Time Team Archaeological site, accompanying the TV series headed by Professor Mick Aston of Bristol University. They note that the area enclosed by a henge varies considerably in size, up to 12 hectares. The oldest dates from around 3,300 BC. Some timber examples have postholes remaining in the ground. Cairns, or standing stones, pits, burials and stone or timber entrance posts may feature.

A henge’s bank lies outside its ditch. This shows that they were not intended as defensive enclosures. It is considered more likely that they served religious or ceremonial purposes. Cremation remains at Stonehenge date from 3030-2880 BC. The remains of around 240 people have been uncovered during excavations.

An ancient avenue runs from Stonehenge to the River Avon. This suggests that processional rites occurred between the monument and the water’s edge. Water was frequently associated with passage to the next world. Dante’s journey to the Styx with Virgil in the Divine Comedy hauntingly demonstrates literature’s spiritual debt. Sun worship also featured in many early beliefs. The Stonehenge end of the Avenue is aligned to the summer solstice sunrise.

The West Kennet Avenue links the Avon with Old and continues to another henge at Avebury. An entire prehistoric ceremonial landscape is thus slowly emerging, around Stonehenge. According to Thomas H. Maugh, in the October 2009 Los Angeles Times Article “Discovery Sheds New Light on Stonehenge”, another henge lies at the opposite end of the Avenue to Stonehenge. British archaeologists found a ring of post- holes close to the banks of the Avon. This confirmed Stonehenge as part of a complex prehistoric spiritual site. Funeral customs linked the visible landscape, stones, water and afterlife.

Bamber Gascoigne, History World 2010 “History of the Incas” summarises 15th century South American Inca sun worship. Modern Cuzco surrounds its Inca origins. Inca masonry is still visible, underpinning church buildings and dominating streets. Three colossal polygonal ramparts on a hillside north of the city are the remains of Saqsawaman. Formerly regarded as an Inca fortress, it is now considered a ritual temple, for state rituals and homage to the sun.

Ritual Sun worship began with chanting at dawn, rising to a noonday crescendo, followed by a gradual diminuendo to a silent dusk. The Incas’ role was as that of the sun’s earthly representatives.

Nancy Durrant and Ben Hoyle revealed new Aztec finds in a June 11 2009 Times article “Aztec Temple Promises to Yield One of Antiquity’s Great Treasures”. Earthquake damage in 1985 may have opened the first known tomb of an Aztec ruler. This is in the centre of the former Aztec capital of Tenochtilan.

Animal skeletons, a fire god sculpture, blocks of incense and wooden masks found near the entrance appear to be offerings. Electronic checks revealed a possible tomb beyond, although some experts think this may be equivalent to a Greek bothro containing offerings. A dog skeleton strengthens the tomb hypothesis, as dogs were said to lead Aztec dead to the afterlife.

Mayan hieroglyphs inscribed on large stones or stellae record the major events in their kings’ lives and other major historical landmarks. Kathryn Reese –Taylor, Associate Professor in the Archaeology Department at the University of Calgary, Alberta, Canada, discusses the Guatemalan jungle excavations at the site of the city of Naachtun. Her BBC History article of 17th Feb 2011 “Naatchun: A Lost City of The Maya” shows that Naachtun was caught between two warring Maya kingdoms, Tikal and Calakmul. The stellae show the funeral customs for an important woman, and give details of her re-interment, overseen by both rival kings. This is very rare and indicative of her diplomatic and political status.

Veneration of Ancestors was a Central Confucian Value

Chinese rituals included the veneration of ancestors’ portraits, on New Year and birthdays. This predates Confucius, who strongly advocated it, along with respect for the entire social hierarchy. Offerings were made at domestic altars to the dead relatives, or at family temples.

Chinese Buddhism dates from around the 3rd century AD, having arrived from India. Believers aspired to free themselves from the reincarnation cycle by attaining a mentally sublime state called Nirvana. They prayed repeatedly, focussing on statues of Buddha and the Bohisattvas. The latter were saints who had chosen to return to earth to help others attain Nirvana, despite achieving it. See G. Appleton, The Oxford book of prayer, Oxford University Press, 1988, ref Sengts’an The third Patriarch, ‘On Trust in the Heart’, from the Chinese Mahayana.

The cruciform floor plan of Christian churches reflects the crucifiction, with the altar as the central focus for devotion and communion. The communion service, with its origin in the Last Supper, focusses on the altar as the Lord’s table, to which the devoted and penitent are called to receive the sacrement.

Jewish synagogues contain a representation of the Arc of the Covenant, which features in key sections of the service.

The dome of the Muslim mosque symbolises the universe, under Allah’s control. The Old Testament concept of the heavenly firmament is an interesting comparison. Whereas the roof of the Sistine Chapel was elaborately painted, by Michelangelo, Mosques may not be thus adorned, as such artwork is considered an idolatrous copy of the creator’s work. Beautiful, intricate geometrical designs are substituted.

The continuous, central influence of belief and custom on ritual, spiritual sites and buildings reaches from antiquity through the dark ages and the Renaissance to the present.