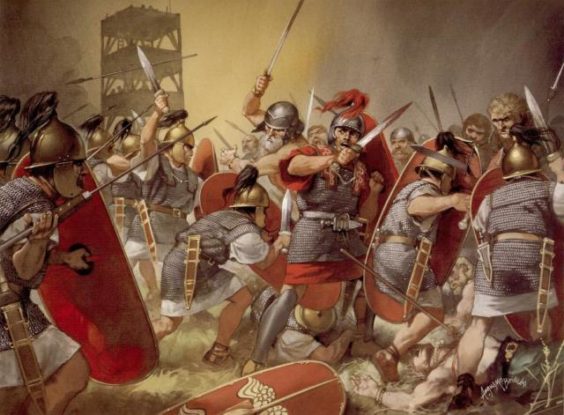 The 52 BC Battle of Alesia was the concluding episode of Julius Caesar’s conquest of Gaul.

Implementing a ruthless, classic strategy of siege warfare at Alesia, Caesar put an end to six years of Celtic resistance and placed most of what is today’ Western Europe under Roman rule.

While nobody is quite sure where the clash took place, it is widely believed that it was in and around Mont Auxois; a peak that towers over the modern town of Alise-Sainte-Reine, near Dijon, France.

Causes of the Confrontation

A member of a powerful patrician family, Caesar was a member of the First Triumvirate – an informal ruling junta – with Crassus and Pompey. As politics drained his family’s coffers, Caesar decided to obtain an appointment as consul of the Cisalpine (this side of the Alps) and the Transalpine (the other side of the Alps) Gaul provinces.

As consul – akin to today’s governor – he could make some money either by bribery or by new conquests. He managed to get himself appointed to two five-year terms, instead of the usual one.

Beginning in 58 BC, Caesar defeated or made peace treaties with most Celtic tribes in both areas, obtaining great treasures in spoils of war and taxes for himself and for Rome.

Caesar became a hero of the Roman Republic but his political powers began to take a tumble by 54 BC. His daughter, Julia, who was married to Pompey, died at childbirth and Crassus was killed in battle. Many a senator considered Caesar a threat to the Republic accusing him of fancying himself a monarch.

Furthermore an allied tribe, the Belgian Eburones, revolted and smashed the Fourteenth legion. Unable to get reinforcements from Rome, it took Caesar about a year to put down the uprising. But, by then, the Gauls – the Celticc people of the area – knew they had to band together to defeat the Romans.

Furthermore an allied tribe, the Belgian Eburones, revolted and smashed the Fourteenth legion. Unable to get reinforcements from Rome, it took Caesar about two years to recover. The Celts knew they had to band together to defeat the Romans.

At a general council in the hill fort of Bibracte, in today’s Burgundy, the Celts elected Vercingetorix, a nobleman of the Averni tribe of Southern France, as commander of their combined forces.

Catching the Romans by surprise Vercingetorix was successful at first, forcing Caesar to retreat at Gergovia in September 52 BC. Eventually though by shrewd use of cavalry tactics, Caesar divided the Celtic forces.

Vercingetorix decided to mount the first recorded scorch earth campaign and have his men escape to Mont Auxois.

The Siege and Combat

Realizing that there were anywhere from 100, 000 to 250,000 Celtic warriors in the easily defended fort and that he had only about 60,000 legionnaires, Caesar decided against a frontal attack. His only real alternative was a siege.

In three weeks Caesar’s legions built an encircling wall some seven miles long and 12 feet high. On the enemy side of the structured, called a circumvallation in Latin, two 15 feet deep and 15 feet wide trenches were dug up. Diverted water from one of the nearby rivers filled the ditch closer to the Gaul’s fort.

While the Romans worked, Vercingetorix was not inactive. His cavalry harassed the laborers but Caesar’s mounted forces under the command of Mark Anthony, Gaius Trebonius and Titus Labienus, made him pay dearly for the incursions.

However a horseback unit of the Gaelic army managed to escape. Rightly concerned that they would bring reinforcements, Caesar decided to built another, outward facing, similar fortification, in effect locking his forces between two walls. The outside fortification covered some nine miles.

Shortage of food and deteriorating living conditions forced Vercingetorix to try some desperate measures. In the hope that the Roman would let them go, he let every woman and child out of the fort. Caesar would ha none of it and just kept civilian in the no-man land between his legions and the Celts.

By late September, the relief Celt force arrived. They attacked the roman from one side and Vercingetorix send his forces from the other. But the legions held. A night attack followed. But Anthony and Gaius Trebonius used their cavalry to repel the incursion.

The following months, with the Romans tired and having their own supplies problems, the Celts attacked the weakest part of the Roman defense – a segment were the topography did not allow for a unbroken barrier. The Celtic force, some 60,000 strong, almost broke through. But Caesar’s personal leadership and courage – he rode through the front encouraging his men – changed matters.

Eventually, Caesar got his troops to counter attack. The enemy panicked and a rout followed. By nightfall, only the Romans fatigue had saved the Gauls from total extermination.

Even though some mope up activity continued for a couple of years, the area that is today’s Northern Italy, Switzerland, France and Belgium was in Roman hands. It would be divided into various provinces of the future empire. New cities would sprout in the area, all of them Roman.

Caesar would become immensely rich thanks to loot and the huge number of slaves he acquired. Even his legionnaires would get at least one slave each. In addition his popularity and political clout would reach new heights.

The Senate refusal to allow Caesar a victory parade, the greatest honor a Roman general could receive would be one of the reasons of why the Republic would be thrown into a civil war two years later. The fratricide conflict would mark the end of the republic and the beginning of the empire.