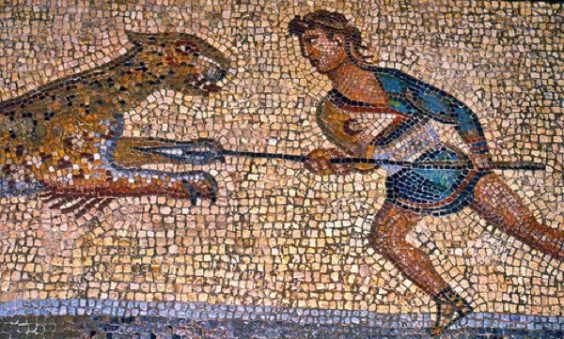 But, not all notorious gladiators won fame for their prowess in the bloody competition that entertained the Roman masses. Several of the best known were emperors and a few, rebels.

The allure of the arena, and the rewards it could bring, was such that even emperors seek the benefits of triumphant bouts in the violent world of the gladiatorial games. Their attempts, however, met with disapproval from one side or the other of the Roman society.

It is difficult to list all the gladiators whose exploits turned to myths, for records are, at best, sketchy. In this article, we will focus in some whose stories can at least be partially substantiated.

Flamma was a secutor, a heavy armored gladiator with a tight fighting helmet who usually fought the retiarius; the lightly armored fighter with a net and a trident.

A Syrian, his record of 21 victories, four defeats and nine draws is quite impressive. He was given the radius – a wooden gladius used a symbol of freedom – four times. Each time he returned to the arena.

Most of what is known about Flamma comes from his gravestone.

These two men are forever joined for they became gladiators together and later fought one of the most famous and best documented combats ever.

It is not known where Priscus, was from, but he was first a slave in the quarries, where he developed something of a tough guy image. As a gladiator he was a murmillo- one that won a helmet with a fish on it, armor on his right hand and left foot and carried a large legionnaire style shield.

Priscus won his very first fight, against a well known retiarus named Septimus. From then on he was one of the biggest stars in the arena.

Verus was from Moesia, a territory in the Balkans. There he was taken prisoner in 78 A.D. After working at the stone quarries near Rome, he was recruited for a lotus (gladiator school) when he picked a fight with Priscus in front of the owner of a gladiator school (lanista). Priscus was also chosen.

However, it took Priscus sometime to become a star in the arena for he lost his first fight.

The two friendly enemies chugged along becoming veteran champions and then, the Colosseum was inaugurated.

The spanking Flavian Amphitheater as the Colosseum was known for it had been built by emperors of the Flavian Dynasty was opened by emperor Titus with 100 days of activity.

The first fight ever in the famous arena was that between Priscus and Verus. The gladiators displayed such skill and courage that both men were declared winners. They were each given a radius, declared free men and walked out of the arena together.

Emperors Who Wanted to be Gladiators

Such was the popularity of the gladiators that many emperors assumed a fighter persona to ingratiate themselves with the people of Rome. Among the emperors who took to the arena were Caligula, Hadrian, Titus and others.

No emperor, however, delighted so much in being thought of as a gladiator as Commodus. Under the name of Hercules Reborn, Commodus fought gladiators and slaughtered exotic animals. Like the other rulers who participated in the games, Commodus was always victorious.

Spartacus and his Buddies

Better known for their struggle against Roman power than as for their combat in the arena, the Thracian Spartacus and the Gauls Gannicus, Castus, Oenomaus and Crixus are as close as household names as any Roman gladiator can be today.

Books, movies and television have dwelt in their fight with the Roman legions during the Third Servile War of 73 to 71 BC. They were all form the lotus of the Batiatus family in Capua. Their combine forces came as close as any group of former slaves ever got to topple Rome.

It seems that all but Spartacus died in combat. The fate of Spartacus is somewhat more obscure for he was reported killed in battle but his body was never found.