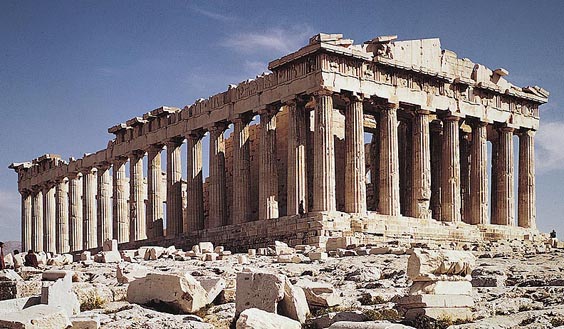 When you think of Greece, you think of the Parthenon. It remains today the ideal of Classical architecture and artistic design.

The Parthenon stands today as the epitome of Greek architectural design, still perched on its spot on the Athenian Acropolis, though in quite a state of disrepair. It still holds up relatively well, considering the abuse it has endured since it was built well over 2,000 years ago. It remains a symbol of the strength and power of Ancient Greece, and its design has been emulated the world over in modern structures.

The Parthenon was a shrine to Athena, the patron goddess of the city-state of Athens. It was the central point of worship to her, where all festivals in her honor culminated, including the Panathenaic Procession. However, the Parthenon was not only a grand temple for a patron goddess; it stood as a reminder and a reflection of the military power and political prowess of Athens, and its leader, Pericles. It was literally a monument to celebrate Athens’ military victory over Sparta in one phase of the Peloponnesian War.

Earlier in the 5th century B.C., the Athenians began construction on a temple to Athena on the Acropolis. This original Parthenon was not to be completed. When the Persians sacked Athens in 480 B.C., what work that had been completed was destroyed, save for the foundation blocks. And when Pericles swore on the Oath of Plataia that no temples that had been destroyed by the “barbarians” were to be rebuilt (as a memorial and reminder of the senseless destruction of the city), it seemed that there would never be a Parthenon.

After several years had passed, and Pericles opened up the Delian Treasury for himself and his city-state, new plans were developed for another, even grander Parthenon, on the same site as the original. No expense was to be spared in its design and execution. Pericles turned to the top architects and artists of the day, including architects Iktinos and Kallicrates, and sculptor Pheidias. The temple was, after all, the embodiment of Athens’ and Pericles’ superiority over the rest of the world. Construction on the grand sanctuary began in 447 B.C.

The Parthenon is widely considered the high point of Doric architecture, though it famously has several Ionic elements incorporated in its design, including a continuous sculptural frieze and four Ionic columns that support the roof of the opisthodomos. It was a peripteral temple, characteristic of the Doric style, with simple Doric columns surrounding the outer porches. It was also adorned with triglyphs and metopes on the entablature, as well as high relief sculptures on its pediment. The metopes were sculpted in high relief as well. The entire temple was constructed with Pentellic marble, which was readily available to the workers.

The Parthenon is considered to be a “perfect” temple. To look at it from its front, it looks perfectly straight. But, the genius of its temple lies in the optical refinements that were used in order to fool the eye into seeing something totally straight. From the foundation upwards, the horizontal lines of the columns and walls were made with a slight inward curvature. This gave an upward lift to the appearance, making the temple appear taller and giving it more strength. The individual columns were given this treatment as well. They were tapered vertically, growing slightly narrower as they went up.

Inside all Greek temples, there would have been a cult statue. The Parthenon was no exception, and the cult statue of Athena must have been truly an awesome spectacle. It is said to have been carved out of pure ivory, and embellished with gold. She would have stood 12 meters (or about 39 feet) tall, and would have been adorned with a heavy peplos that would have been changed during the Panathenaia. Unfortunately, nothing remains of this supposed sculptural wonder, as the statue was taken away to Constantinople during the late Roman Empire, and it was lost forever.

Construction on the Parthenon was completed in 432 B.C. It was documented by ancient scholars and historians, who described it splendor and magnitude. It was truly a monument befitting Athena, and her city of Athens. It stood in all of its glory for nearly 1000 years, through the Classical Period, the Hellenistic Period, and it even survived Roman times, when Athens was reduced to a mere province of the Empire. After the cult statue had been taken to Constantinople, the Parthenon was converted to a Christian church, which likely helped it to survive even longer. Then, in 1456, the Ottomans took Athens, and the Parthenon became a mosque.

But, the Parthenon received a great literal blow, when in 1687, under attack from the Venetians, the Ottomans used the Acropolis as a fortification, and stocked the Parthenon with gun powder. The Venetians fired from a nearby hill, and hit the temple, devastating its internal structure, collapsing its roof, and causing great damage to its sculptural decoration. And thus was the end of the Parthenon’s long and majestic history. Today, it is a protected historical and archaeological site, having been undergoing restorative renovation in the last several years. Though it is only a shell of its formal self, one can still appreciate the skill and beauty of this once great and important structure.