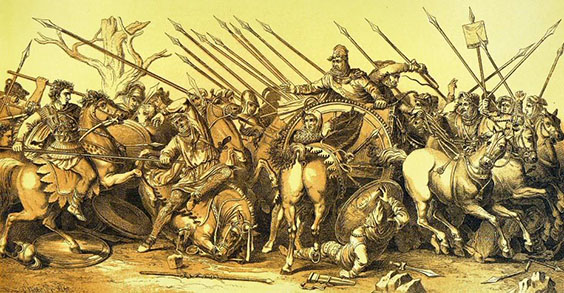 Frequently out-numbered, Alexander demonstrated risk-taking as well as strategy against the forces of Darius III, ultimately conquering the empire of Cyrus.

Alexander the Great was only twenty years old when his father was assassinated in 336 BCE. After consolidating his power in Macedonia and putting down revolts in Greece, notably at Thebes, he turned his attention to the Persian Empire. A military risk-taker, Alexander was also a superb strategist, seen in the siege of Tyre, the Scythian defeat at the River Jaxartes, and his final battle against Darius III at Gaugamela (Arbela in older history texts).

Crossing the Hellespont in 334 BCE, Alexander hastened to Troy where he sacrificed to Athena and paid homage to Achilles, the legendary Greek hero he believed to be an ancestor. Educated by the great philosopher Aristotle, Alexander had become devoted to the works of Homer, traveling with a copy of the Iliad and influenced by the super-human exploits of past history.

The Persian satraps hastily gathered a force that included Greek mercenaries to stop Alexander. In that same year, the two forces met at the River Granicus. Against the recommendation of his generals, Alexander attacked immediately, massacring the Persian cavalry and infantry although almost losing his life in the process.

The Persians fled in disarray, leaving the Greek mercenaries to their fate. Several thousand of these unfortunates were sent back to Greece as slaves, the rest were massacred. Turning south, Alexander marched along the Aegean coast, capturing cities and leaving Macedonian garrisons that maintained control.

At the battle of Issus in 333 BCE Darius III confronted Alexander with a mighty army. The Persians relied on a larger force but would repeat mistakes made at earlier battles with the Greeks such as at Plataea and the Marathon plain. Alexander’s cavalry, positioned on the Greek right flank, attacked the Persian left flank, driving toward the army’s center. Darius himself was positioned on the left flank. Darius turned and fled, sending his army into a rout.

Alexander marched south to Egypt, accepting the surrender of numerous Persian cities and strongholds. Only Tyre and Gaza resisted. Both were besieged and taken. With the destruction of Tyre, Alexander also neutralized Persian naval abilities in the Mediterranean. Arriving in Egypt in 332 BCE, Alexander extended Greek influence, further beginning a process historians refer to as Hellenization.

The battle of Gaugamela was the last fight against Darius and would clear the way for Alexander’s triumphal entry into both Babylon and Susa. At Gaugamela Darius assembled a vast army, choosing the battle site himself. Much like at Issus, however, Alexander employed his infantry on the left flank and his cavalry on the right. He also kept men in reserve.

Alexander’s cavalry again helped to win the day as the Macedonian phalanx held back Persian onslaughts. Darius turned and fled. Alexander was now the master of Persia. Appointing Greeks to command garrisons, Alexander also retained Persian officials, particularly those that had treated him favorably.

Both Babylon and Susa were spared from destruction. The Greeks were under strict orders not to plunder or harass the inhabitants. Persepolis, the spiritual center of the Persian Empire, was not as fortunate. Accounts relate that the decision to burn the city after having looted the palaces and temples came during a night of riotous drinking and that Alexander himself danced naked before the flames of the city.

The destruction of Persepolis in 330 BCE was highly symbolic. In many ways, the firing of the city was an act of revenge for Persian destruction of Greek temples, notably in Athens, during the Persian wars. From Persepolis Alexander turned toward India. He reached the Indus River but turned back after his men refused to go any further. In 323 BCE Alexander died in southern Persia, leaving no heirs.