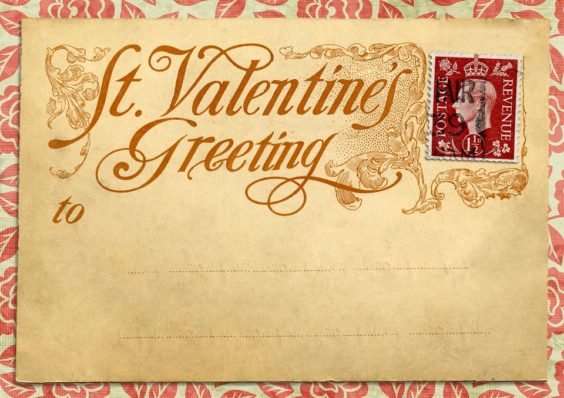 There are a number of choices you can make this Valentine’s Day, from the traditional poems of love, to the witty and sublime. Paramount, of course, is the person(s) you are sending the card. Is it a lover? A friend? A family member? A child? Or, perhaps, just someone you haven’t seen in a long, long, time; that you wish to get reacquainted with.

Whatever or whoever, the choices are there; it remains for you to sift through them, and unless you are sending an E card, they are yours to pay for as well. Actually buying a personal card and mailing it these days, has become quite expensive, along with everything else on this green earth. It’s not quite like the old days, when you could go to the local five-and-dime store and plunk a quarter down for a card; or fifty cents for a really good one.

The Origins of Valentine’s Day Cards

It is believed that St. Valentine might have sent the first Valentine’s Day greeting himself. While he was imprisoned prior to his execution, it is alleged he fell in love with a young girl; who may have been the daughter of his jailer. Before his death, the legend has it he sent her a letter that he signed “From your Valentine”; an expression still in use today. While there is no proof to confirm this tale, the myth has been passed along for centuries.

In Great Britain, Valentine’s Day began to be popularly celebrated around the seventeenth century. By the eighteenth century, it was common for friends and lovers in all social classes to exchange small tokens of affection or handwritten notes. By the end of the century, printed cards began to replace written letters due to improvements in printing technology.

Ready-made cards were an easy way for people to express their emotions in a time when direct expression of one’s feelings was discouraged. Cheaper postage rates also contributed to an increase in the popularity of sending Valentine’s Day greetings. Americans probably began exchanging hand-made valentines in the early 1700s. In the 1840s, Esther A. Howland began to sell the first mass-produced valentines in America.

Esther Howland, the First Lady of Valentine’s Cards in America

Esther Allan Howland was born at 16 Summer St. in Worcester, Massachusetts. A pioneer in the American Valentine’s Day greeting card manufacturing industry, it was after graduating from Mount Holyoke College in 1847 that she received her first Valentine’s Day card from England.

Fascinated with the idea of making similar Valentine’s, she imported the necessary paper, floral decorations, and lace from England. She began taking orders for Valentine’s and was surprised that demand for them out paced the amount she could make by herself; thereby having to recruit friends to help her. She took out her first advertisement in a Worcester newspaper, The Daily Spy, on February 5, 1850. The assembly line business that originated in her home, gradually became a thriving enterprise that grossed $100,000 annually. She retired in 1881, selling her operation to the George C. Whitney Company.

Howland was credited with several innovations in Valentine’s cards design; including the small, brightly colored wafer of paper underneath the white lace for contrast, and the built up shadow box that became popular later in her career.

According to the Greeting Card Association, an estimated one billion Valentine cards are sent each year, making Valentine’s Day the second largest card-sending holiday of the year. (An estimated 2.6 billion cards are sent for Christmas.)

Approximately 85 per cent of all valentines are purchased by women.

In addition to the United States, Valentine’s Day is celebrated in Canada, Mexico, the United Kingdom, France, and Australia.

Valentine greetings were popular as far back as the Middle Ages (written Valentine’s didn’t begin to appear until after 1400), and the oldest known Valentine card is on display at the British Museum.

Some Hints About Sending Valentine’s

The main thing to consider is to whom you are sending the card? For starters, send age-appropriate cards; this will be easy, as the retailers will already have them separated for you. Matching the situation will be much more difficult, though, for relationships are often complicated, and you in fact may have more than one you want to cover.

The thing to remember is this: Valentine’s is not supposed to be a mean-spirited holiday, so choose your cards and words carefully. If you are harboring ill-feelings or resentment, often the best choice is to not send a card at all.

Perhaps of most importance to all, are the cards you receive; here’s hoping you get the one’s you are looking for!