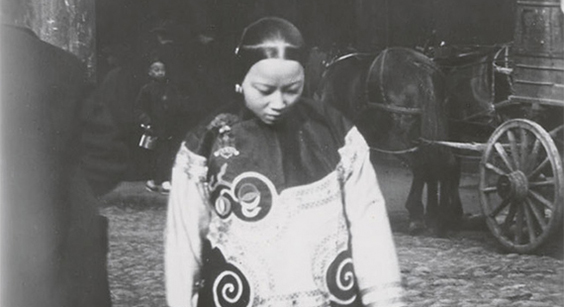 About 1848 a Chinese woman called Ah Toy arrived in San Francisco, California. She had endured the long sea voyage from her native Canton, as she stated years later in a court of law, to “better her condition.”

Ah Toy became familiar with early California’s judicial system. Her first court appearance went mostly unnoticed. Her second left more of an impression. It has been recorded that she entered the court dressed in an “apricot satin jacket and willow-green pantaloons.” On her small tightly bound feet was a colorful pair of tabis. Her raven hair was arranged in a chignon, while her eyebrows were black and pencil thin. The whole colorful picture contrasted with her white cheeks that had been rice-powdered.

She was in court this day because some miners had paid her with brass filings instead of gold. Before Ah Toy could explain the nature of her complaint the judge asked why arriving miners ran to Ah Toy’s residence? Unfortunately, her reply has been lost but a newspaper reporter paraphrased a more exact solution. “They came to gaze upon the countenance of the charming Ah Toy,” he wrote. Some miners came to do more than look.

You see, Ah Toy was a prostitute. For the miners who only wanted to look the price was one ounce of gold which was about $16.00. This form of entertainment was called a “lookee.” Often this gazing option was advertised as a “two bittee lookee,” which differed from a “flo bittee feelee,” or a “six bittee doee.”

Concerning the short-changing in payment the miners were attempting to put over on her, Ah Toy explained she’d discovered the brass filings herself. When the judge found this hard to believe of the two men accused, Ah Toy point out others in the court room who were also guilty of this crime. Ah Toy presented a china basin full of brass filings as evidence but the charges were dropped.

Prior to this Ah Toy’s status in San Francisco’s Chinatown underworld had changed. She had become amorously involved with several white man of wealth and prominence. She bought her own freedom and established herself in the business of importing girls for the local houses of prostitution. She became one of the wealthiest and main dealers in Chinese prostitutes in the California. At her place of business off San Francisco’s Clay Street, in an alley known as Pike Street, the money flowed in like liquid gold.

Around 1854 Ah Toy was several time arrested and convicted for “keeping a disorderly house” though the white madams were not accused of this crime. Eventually, Ah Toy gave up and soon disappeared from San Francisco. She was not forgotten in the city by the bay. Over time many ladies of the evening called themselves after the notorious first Chinese prostitute in San Francisco. In her own way, Ah Toy was a true pioneer of the California Gold Rush.

In 1928 a small notice appeared in the San Francisco Examiner announcing the death of a Mrs. Ah Toy. of San Jose. The notice was for the last rites of Ah Toy who died within a few days of her hundredth birthday. Whether this was the famed madam of San Francisco’s early days is unknown, but according to recorded history, the Ah Toy of this article was twenty years old when she arrived in San Francisco. This would indicate she was born sometime in 1829, exactly one hundred years before the death notice of the Ah Toy in the Examiner. Perhaps she did not return to China, and perhaps her slender body and laughing eyes were not forgotten after all those long-since gold-seeking years.