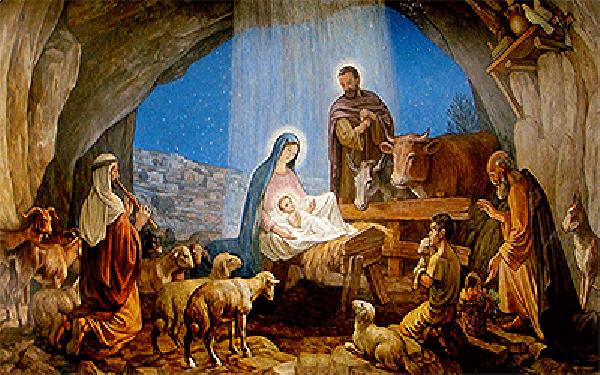 Before there was Christianity there still was “Christmas” it just wasn’t called that. People celebrated at the end of the year when time on the clock ticked a bit slower, and the sun was not shining as long. Human beings have always been superstitious, so they chose to hedge their bets and celebrate the sun. Possibly in the hopes of not angering anyone, who would want the winter winds to blow their house away?

All of the traditions which are commonly celebrated at Christmas originate from Northern European tribes. The tree, the 12 days of Christmas, the date of the holiday, giving gifts, lighting candles and the food all are traditions from the celebration of the Winter solstice or Yule. This was a 12 day celebration typically beginning sometime between December 17th–21st . It was celebrated the day before the shortest day and longest night, known as the winter solstice. People gave gifts, feasted and burned a Yule log for 12 days. Candles were lit to brighten the darkness.

The people of Northern Europe also brought trees into their homes and gave freedoms and special meals to their slaves. These feasts happened out of necessity due to the harsh winter approaching and the inability to take care of livestock, some would be slaughtered before the winter freeze and a meat-feast began. This would be the main time of year fresh meat was available, unlike the grocery stores we have today.

I’ll Have a Roman Christmas Without You

For Romans, their “Christmas type” celebration went on for a month beginning with the celebration of Saturnalia, the god of Agriculture. They would give thanks and gratitude about the crops. This would begin about a week before the solstice. Society would be turned upside where slaves became masters, peasants ran the city and people drank, ate and were merry.

December 25th was formerly the date many Romans celebrated the sun god. The church chose to absorb this holiday as they did with Easter, this way nothing had to be outlawed. Early Christians did not celebrate birthdays, and their first main holiday Easter-though a seperate holiday on its own-is also an absorbed pagan holiday. December 25th would now serve as the date of the birth of the baby Jesus. Biblical scholars have yet to discover the actual date of Jesus’ birth, though based on some bible passages suggest early spring. Unfortunately there are two separate accounts in the bible, the combination of Luke and Mathew presents the story most know of the birth of Jesus.

These traditions have lasted for thousands of years. We still sing songs, eat food, bring in a tree and give gifts. As time has evolved so has the holiday.

The Two Celebrations of Christmas

Christmas in the 6th century had two celebrations as it does today. There was a quiet holiday,spent praying in church and singing Latin hymns. And there was the holiday spent in the streets with the community. Which was also full of songs in the vernacular, though much louder, most likely enhanced by beers and brandies.

Of course since the industrial revolution Christmas has become a business much like everything else. Lights, cards and decorations were manufactured in the 1800’s. Santa made his first American appearance in Macys in the 1840’s and later became the Christmas pitchman for nostalgia and charities.

Toys and other gifts became much more commercial through the years, however for those in your circle who attempt to tell you gifts are a new tradition. You can tell them, gifts were always part of this time of year. People for the past 2000 plus years have given thanks and gratitude to the important people of their lives. Christmas and it’s holiday cousin’s hold various traditions for every household. One theme is universal. After working hard all year many feel they need time off.