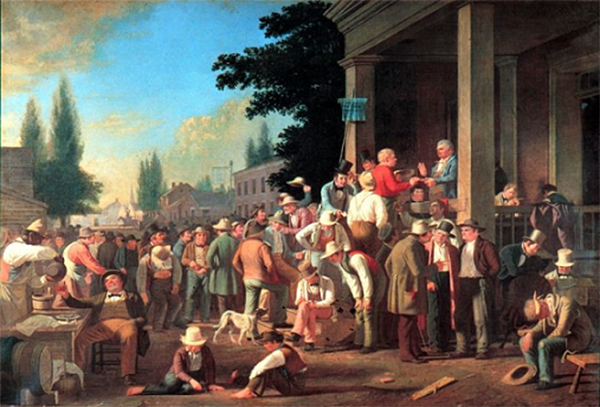 On August 3rd, 1846, the citizens of the territory of Iowa voted on a state constitution. The most contentious law in that document was the prohibition of both banks and the issuance of paper currency. This prohibition stirred up strong opposition to the constitution but it passed 9,492 to 9,036. The close result would ensure the continuance of this hot-button issue between Democrats and Whigs in the state election slated for October 28th to choose state officials and legislators.

The first state convention of the Democratic party in Iowa met in Iowa City on September 24th. The platform it approved was consistent with the prevalent Democratic philosophy, including a distrust of banks and corporations:

The man the convention nominated for governor to uphold this platform was 40 year-old Ansel Briggs. Ironically a Whig in his younger days in Ohio, he declared himself a Democrat after moving to Andrew Jackson County Iowa in 1839. He owned a very successful stage coach business that enabled him to be well-known throughout the territory. His previous elected positions were Iowa Territorial House representative, Jackson County Deputy Treasurer, and Jackson County Sheriff.

The following day, the state Whig convention also gathered in Iowa City. The platform they hammered out followed the national Whig line, which embraced banks, paper currency, and government aid to the economy:

Condemned the state constitution recently adopted, and pledged to amend it quickly (pro-bank)

The Whigs chose Thomas McKnight for governor. About 20 years older than Briggs, McKnight was a merchant in St. Louis as a young man. In 1822, he was elected to the city council and was director of the first Bank of Missouri. In the 1830s, he came to an area north of Dubuque, Iowa, then known as Peru. He was a postmaster, Wisconsin territorial senator, and receiver at the federal land office of the Galena district, located in Dubuque.

The ensuing campaign revolved around banks. People of the Democratic persuasion fretted about banks based on history. The Panics of 1819 and 1837 led to bank failures. The Iowa territorial bank also failed. Many believed the banks themselves caused economic calamity and if they accumulated too much power in government, the people’s liberties would be at risk. It was no wonder that a Briggs quote from a political banquet became a popular campaign slogan: “No banks but earth and they well tilled.”

McKnight and the Whigs had a fear of their own – a powerful executive branch. They had witnessed that power when Democratic President Andrew Jackson mercilessly fought his “Bank War” against the Bank of the United States in the 1830s. But Whigs had confidence – almost half of Iowa voters had rejected the “bankless” constitution. Unfortunately, the October election mirrored the close constitutional vote – Briggs won 7,626 to 7,379. The whole Democratic ticket prevailed.

President Polk signed the proclamation for Iowa to become a state on December 28th, 1846. Briggs took over a Democratic state, and its neighboring states, like Illinois and Missouri, were also Democratic. But as the 1850s went along, Iowa’s hatred for banks was replaced by a hatred for slavery, culminating in the 1859 state election.