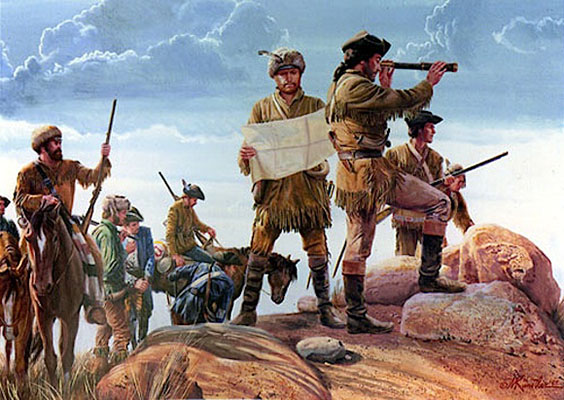 In 1804 the Lewis and Clark Expedition left the civilized world, Missouri, to begin an enormous trek west as they followed the Missouri River. They would cross the entire westward portion of the newly acquired land until they reached the Pacific Ocean.

Setting out in three boats, a fifty-five foot long keelboat and two pirogues, William Clark and Meriwether Lewis’ party consisted of forty-five men. Various white nationalities represented in this group totaled forty-four paid hands who had volunteered to be included in this adventure.

Alone in representing the African Americans was a slave, York, who of course had no say as to whether he cared to risk his life exploring a new nation. York was the slave of William Clark who always referred to the Black as his servant.

Undoubtedly, York did his share of the work as the party progressed upriver. One notation in a journal of the trip mentions York swimming across the river to collect greens and cress when many of the men were suffering from dysentery.

By October they had reached the first occupied Arikara village. Lewis and Clark met in council with these Indians for two days, telling the Indians about the new government and seeking advise on the rest of the route they must take. The Arikara, unlike the Sioux who had already been encountered, were willing to be friendly with the whites. They were glad to help with the planning of the further route as far as they knew. However, their interest was soon diverted from that of advisors to that of curios inquisitors. The source of their diverted attention was none other than Clark’s slave, York. These Indians had seen red men, of course, and they had met white men just as they now were doing. But they had never seen a man whose skin, from head to toe and without being painted so, was Black! And York made the most of the situation.

York entertained the Indians with feats of strength. He told them how he had once been a wild animal and ate people until he was caught and tamed by Clark. York’s master made note of York’s antics and yarning in his journal with:

“Those Indians wer much astonished at my Servent, they never Saw a black man before, all flocked around him and examind him from top to toe, he Carried on the joke and made himself more turribal than we wished him to doe.”

By Christmas the party had reached the Mandan village. On New Year’s Day several of the expedition’s men celebrated the occasion with the Indians, bringing with them a fiddle, a tambourine, and a horn. While celebrating, Clark “ordered” York to dance for them. Whether or not York wished to do so isn’t mentioned in Clark’s notes, but perhaps, in light of the slave’s earlier antics, he may have enjoyed the dancing.

On November 18, 1805, the slave York was amongst the group of Lewis and Clark’s men who camped on the shores of the Pacific Ocean. I can not help but wonder if York, at this time, thought of another ocean, one that his own ancestors had crossed aboard slave ships, bucking and grinding its way to the land of the free.

One year later, on November 5, 1806, the Columbian Centinel of Boston, Massachusetts announced, on a back page, that the Corps of Discovery was home.

There are conflicting stories about York’s future adventures. Clark did, in time, free York and set him up in the freight-hauling business with a wagon and six horses. But York’s good fortune was not to last. After two of his horses died he sold the others and went to work for wages. It seems that Clark believed, but was uncertain, that York had died of cholera in Tennessee. York was supposedly on his way back, at the time, to enter his old master’s service.

There is, however, a tale of a Negro living amongst the Crow Indians, in 1832, who claimed to have come to the country with Lewis and Clark. It was said that he was a chief, had four wives, and was treated with much respect by the Indians. Strange, but this tale also, except for the part about coming west with Lewis and Clark, is very similar to the claims made by the Black Mountain Man James Beckwourth. But who knows for sure? It would be wonderful to believe that York lived out his final days in such a free and friendly environment.