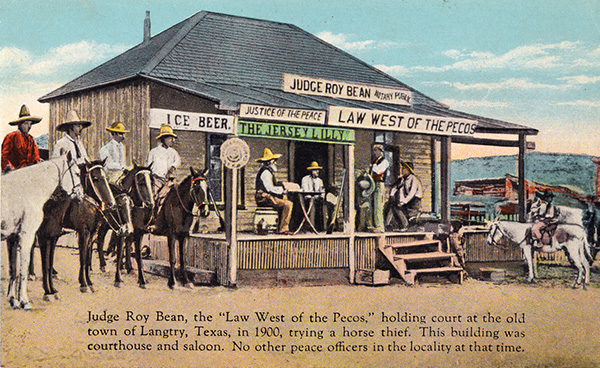 For the third time in ten years Roy Bean is rescued from desperate straits by an older brother.

Roy Bean showed up in Mesilla, New Mexico Territory in the winter of 1858-1859 destitute and wearing rags. In his memoirs Sam Bean described the reunion with his brother, “He was practically naked. But he was my brother so I got him some clothes, had him shaved and cleaned up and gave him some spending money.”

Sam Bean Sheriff and Prominent Citizen with a Loud Voice

Sam Bean was serving his second term as Sheriff of Dona Ana County, a 150 mile-wide strip of chaparral, arroyos, and lava flows that ran from Texas in the east, though New Mexico and what is now Arizona to the California line in the west. Sam Bean complained that Dona Ana County was so big effective law enforcement was impossible. Sam Bean did not wear a gun and let the sparse population settle their own affairs so long as it did not interfere with business.

Mesilla was a bustling transportation crossroads with its streets filled with every kind of person a modern frontier community would have in 1859. It was the half way station for the transcontinental stage lines and it was a major way station on the trading route that stretched from Independence, Missouri across the great American Desert, through Santa Fe, to Mesilla across the alkali deserts of Mexico to Chihuahua.

Sam Bean was described as a big man, with a big personality and a commanding “Voz del Carretero;” “Voice of the Wagon Driver,” that could be heard a half mile away with a carrying wind. Men understood the commands of the bull whacker turned Sheriff as well as oxen and mules did.

Roy and Sam Bean Thrive in the Frontier Crossroads of Mesilla

The Beans transported goods and people anywhere in the vast southwestern wilderness of America and Mexico their customers could afford, through some of North America’s harshest terrain.

The Bean brothers expanded their business to the silver boom town of Piños Altos about 100 miles from Mesilla in the mountains above the copper mines of Silver City, New Mexico. The Bean brothers advertised in The Mesilla Times as “purveyors of liquors and cigars” and providers of a “fine billiard table” for the miners of Piños Altos

Writing in Harpers Magazine William H. Bishop described a teamster and wagons hauling copper ore in Arizona, “He threw stones at his horses, as is done in Mexico, that is, at the leaders, which were beyond the reach of his long lash. A single stone was made to carom, such was his skill, and served for both. Long teams of mules or of Texas steers, sixteen to a team, drawing ore wagons–three usually tackled together–were strung intermittently along the road. The Mexican-looking drivers trudged beside them in the chain-deep yellow dust, cracking huge black-snakes [whips] at the animals.”

Roy Bean Begins His Civil Law Education by Being Sued

The silver boom played out in the Fall of 1861 as miners joined one army or the other, then Apaches attacked with three miners and 15 Apaches killed. Roy and Sam Bean abandoned their business in Piños Altos and returned to Mesilla where they faced five lawsuits to collect on unpaid bills from their failed business in Piños Altos.

As the fever of the American Civil War swept across Frontier New Mexico Roy Bean was swept into the war, out of New Mexico and into Texas.