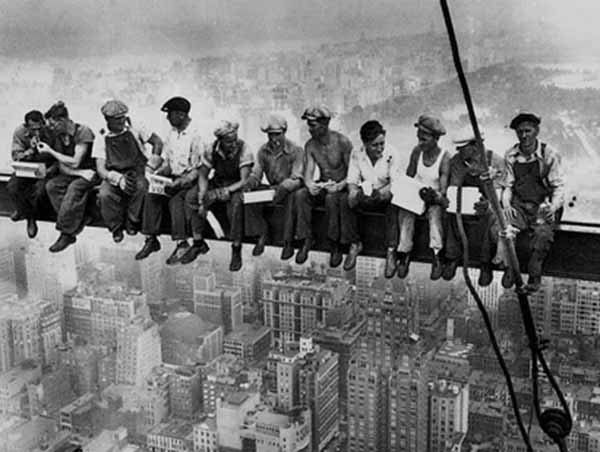 A brief explanation of how one of New York’s well-known landmarks, the Empire State Building, was built.

Anyone who knows anything about New York has heard of the Empire State Building. Standing at 104 stories high and 1,250 ft. tall, it can be seen throughout most of New York City, and even from an approximate 15-20 miles away; but the question that many people seem to ask is, “How did such a majestic structure come into existence?”

When the Eiffel Tower in Paris was erected in 1889, standing at 984 ft., it motivated architects in America to design and create something not only bigger, but better. This brought on a “race to the sky”. By the year 1929, a few players had already had their winning days, such as the Metropolitan Life Tower, the Woolworth Building, and the Bank of Manhattan, but when Walter Chrysler (Chrysler Co.) and John Jakob Raskob (creator of General Motors) entered the race, they were the only two that mattered. Chrysler was in the middle of designing a surprise building, and no one knew how tall it would be, so Raskob had no idea what sort of height he had to surpass. Either way, he set to work designing his building.

Despite the troubles that Raskob had while putting his ideas on paper, the Chrysler Building’s design finished at 1,046 ft. with 77 stories, and the Empire State Building managed to jump up to 1,250 ft. with 102 stories. Once the building was designed and ready to be built, Raskob hired the Starrett Bros. to complete it.

The piece of land that Raskob had chosen for his building currently housed the Waldorf-Astoria Hotel, so before the men that the Starrett Bros. had hired could start building upward, they had to first tear down the hotel. Once the hotel was torn down (16,000 truckloads of debris were carried away!), the men dug even deeper into the ground of Manhattan. On March 17th, St. Patrick’s Day, 1930, the men began to build the Empire State Building.

The Starrett Bros. had concocted a tight schedule for the workers, and there was no time for mistakes or delays. Most of the material that was delivered to the construction zone never touched the ground – it was loaded straight off of the truck and sent up to whichever floor it was needed on. Often, the steel arrived still warm from the forge. The standard building time during the late 1920’s was 3 floors a week, the workers of the Empire State Building erected 5 floors a week.

The late 1920’s was also a dangerous time for construction zone. There were no hardhats, no safety harnesses, and very few safety precautions. During most major projects, it was no uncommon feat for men to die regularly on the job. Starrett Bros. took the safety of their workers a step further than most construction companies, and only ended up with about 12 deaths throughout the project, which was far fewer than normal.

In 1931, the last rivet, made of solid gold, was placed into the structure of the Empire State Building. The building only took one year and 45 days to complete (410 days total!) and its final cost was $40,948,900, which was less than the expected $50 million cost.

The building opened as the tallest building in the world during the month of May, 1931. It kept its title until the finish of the World Trade Center in 1972.