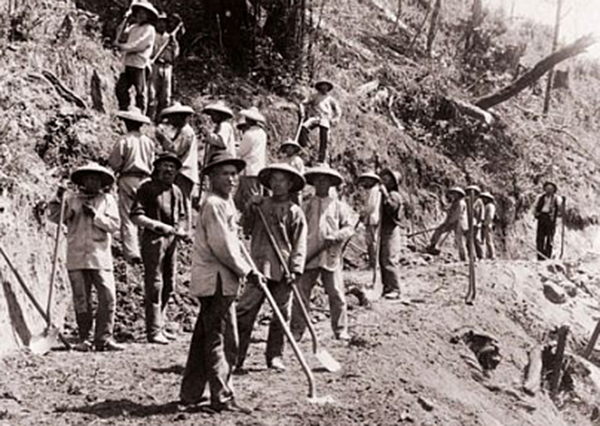 Track the chronological steps of Asian assimilation in United States history, attitudes, and understanding of American socitey toward Asian culture.

I will admit, I have never thought of the issue of “racial clumping’ before now. It is one of society’s many overlooked truths. Because of its blatancy in the United States culture, exploring attitudes, and understandings of American society toward Asian cultural diversity is a fresh argument to discuss.

In the late 19th century, Chinese immigrants participated in the Transcontinental Railroad. Many died during their long travel from San Francisco to Utah. In 1869, a celebration look place in order to congratulate workers on a job well done. However, mainly European immigrants were recognized. Le, the author of the blog Asian Nation, wrote that European immigrant workers were recognized for their contribution and labor during the construction of the Transcontinental Railroad. Chinese men, on the other hand were fired and made to leave, walking back to San Francisco, California. They were also told that although their hands had helped build a key piece in American infrastructure, they were not allowed to ride the train.

Discrimination against the Chinese and other Asian immigrants was far from over. Chinatown began to take shape during the Industrial revolution. This was the result of racist impressions from other immigrants previously established. Society did not see a diverse group of people who had different religions, practices, and cultures. Instead they saw a foreign group of individuals who were different, and in United Sates history, different has shown to mean threatening.

Asian Society in the United States

A diverse group of people means a greater contribution to one society. People of Asian descent are dignified and want to be distinct. In fact, 24% of Asian society are Chinese, 20% are Filipino, 12% are Japanese, another 12% are Asian Indian, 11% Korean, and 9% are Vietnamese(137). The Asian society bring together people who are more different than many people are aware of. “The Asian/ Pacific American population is the most diverse racial and ethnic minority in the United States, although they are often lumped together as “Asians” or “Orientals” (Hurh).

Japanese immigrants first immigrated to the United States through Hawaii to work, unlike the Koreans who were brought the Hawaii to marry and/or to escape the Korean War. Many orphaned children escaped the war and were adopted by American families (Hurh). With them, they brought new ideas and different religions, such as Buddhism and Christianity. But religion is not the only difference between groups. Languages between Asian peoples are different. Even the word for “race” varies greatly over the languages of Asian countries.

Much of Western culture views Asian society as dog-eating, chopsticks-using peoples. If the world were all a stage, a politically sarcastic director would cast the United States as an overweight couch potato eating a TV dinner while an Asian immigrant takes the role as “Iron Chief” preparing his next meal. This is a fallacious realization, and these views couldn’t be farther from the truth. Novelist May Lee Chai discussed accusations of Chinese people eating dog as “false information.” Reportedly it’s hard to find any restaurant in China that will serve the animal, but somehow American tourist will find a way. “When the time came for the ‘feast,’ a crowd of amazed Chinese gathered and snapped pictures as the Americans ate a German shepherd” (Wu). This just proves the ignorance of some beliefs in Western society.

Fortunately, Asian society is viewed a better light today. Asian newspapers first came about in the 19th century and its popularity has grown. Asian television, such as soap operas and sitcoms, is making its way into main society as well. It can be heard in both Mandarin Chinese and Cantonese. However, movies depicting Asian Americans are lower grade films. Asian actors are usually cast as talented cooks or karate kicking heroes. Examples would include Jackie Chan in Rush Hour and Pat Morita in The Karate Kid. Fortunately, Hollywood is starting to break free of this stereotype by making movies that allow asian actora to share the spotlight equally among her two other white counterparts.

It is important that we, as a community, do not use loose terms when discussing another ethnicity. Racial clumping is unnecessary and takes away from the identity of others. It “erases cultural importance.” Every culture brings something new to the table and helps establish society as a multicultural and stronger. I believe that it is important to discuss different issues that are in today’s community. After researching the diversity in Asian society, I’ve come to appreciate ethnic diversity in the United States as strong and unique. My research on Asian culture and history within the United States has brought me from East to West only to end up East to East.