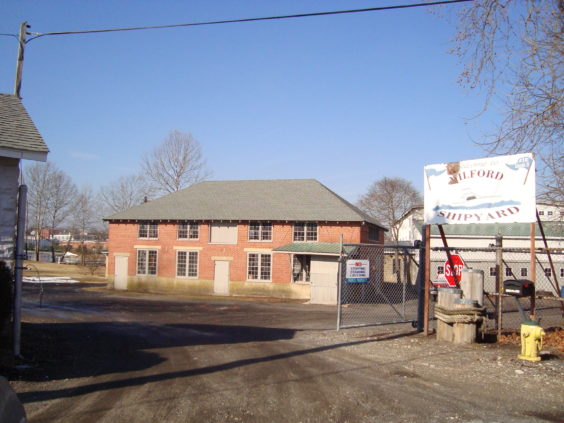 Milford, the largest town south of the Delaware state capital, Dover, was originally famous for the shipbuilders who settled the area. The town still shows evidence of the booming business that built the town in the late 1800’s. One of the most famous of Milford’s founding fathers is Wilson Vinyard, the son of Curtis Vinyard of Illinois. Still standing today are the family home of Wilson Vinyard as well as the shipyard and the homes of some of the workers who helped carve out a maritime career in this small town.

The center of Milford’s Historic District, according to the National Registry of Historic Buildings, is N.W. Front Street. This section of Milford has not been changed significantly over the years and many of the buildings that stand there today were present during the time that ships were being built and sailed from the shipyards along the banks of the Mispillion River.

In 1924, Wilson Vinyard built a colonial-revival style home. This brick home has a center hall and two small wings on each gable end. The home housed Mr. Vinyard, his wife Ella Sharp Vinyard, and their children. The Vinyard’s had a son, Wilson Sharp, and four daughters, Mary, Elizabeth, Eleanor and Caroline. The home sits on what was known as “Purity Row”, which were a group of worker’s homes in the early nineteenth century. In addition to his ship building career, Mr. Vinyard was also the Mayor of Milford from 1932-1936.

This home was passed down to Wilson Sharp Vinyard after his parent’s death and is noted in the younger Vinyard’s will, dated 1970. In an inventory after the filing of this will, the home is appraised with a value of $150,000.

The Shipyard Historic District is located on the banks of the Mispillion River on what is now Columbia Street. The shipyard building is still in use as the Mispillion Shipyard, and the houses that surround the area still look much like they would have when the shipyard workers lived there. Naturally, the shipyard itself occupies the land along the river while the worker houses were built back from the water. This would keep the area along the river for workspace.

The Vinyard shipyard is the only surviving shipyard in Milford. At the time it was designated an historic building, it was the home of Delaware Marine and Manufacturing. The shipyard shared the banks of the Mispillion River with the Abbott Shipyard, which is no longer standing. The houses surrounding the yard were used for housing the workers who built the ships the Vinyard’s were famous for.

Today, the shipyard consists of the offices and warehouse which are built in three sections of brick, concrete and cinder block. The mold/sail loft, which was built around 1900 and the boat house, built around 1929 and the machine ship, built around 1930, still stand.

In Wilson Sharp Vinyard’s estate accounting, the shipyard was valued at $50,000 in 1970 and was willed to his wife, Blanche. It does not appear that the younger Wilson Vinyard and his wife had children.

Wilson Vinyard built his first gasoline powered steamboat, The Delaware, in Wisconsin and piloted the ship through the St. Lawrence Seaway to Milford for many years. In 1896, he founded the shipyard in Milford and rebuilt The Delaware, renaming it City of Dover. This ship, along with others built at the shipyard, carried cargo and passengers to Philadelphia. Tugboats, fishing boats and schooners were also built at the yard. During the World Wars, Vinyard Shipbuilders built tug boats and sub chasers for the U.S. Navy.

The shipbuilding industry is strongly represented in the history of Milford. Today, the Vinyard House still stands as regally as it did during the vibrant shipbuilder period of the town. The shipyard still has several surviving buildings which are currently in use by other businesses. The shipyard was purchased in 1996 by Joan and Sudler Lofland who began restoring the shipyard as well as some of the Vinyard vessels, including the Kismet, the Vignette, and the Augusta.

A visit to either the Vinyard House or to the Vinyard Shipyard will allow you to step back in time to a period when the construction of ships was the major economy in this small town.