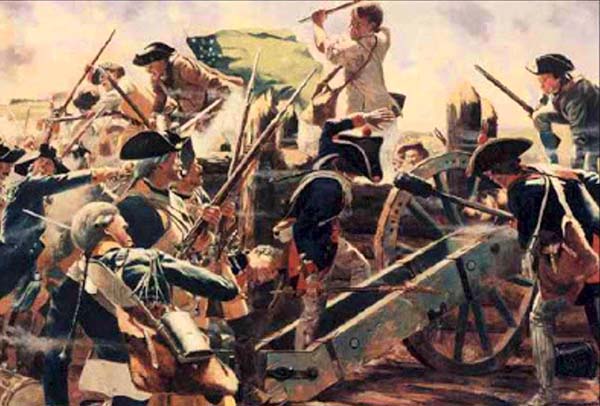 War ballads emphasized courage and sacrifice while promoting the idea of a free America following the actions of tea party activists in colonial Boston.

Ballads have always told a story and the Revolutionary War was no different. In 1776 the hanging of Captain Nathan Hale prompted a ballad attesting to Hale’s courage, although the lyrics fail to mention Hale’s famous quote: “I regret that I have but one life to give for my country.” Three years earlier another ballad identified itself as the “rallying song of the tea party.” According to the first stanza, the writer states, “…tell King George we’ll pay no taxes on his foreign tea…”

Nathan Hale was a spy. According to writer Henry Wiencek, Hale borrowed the famous quote from the play Cato. “In his last moment Hale took comfort from knowing that he had lived according to the highest imaginable ideal.” The ballad reinforces Hale’s convictions: “…To Heaven he went, to Heaven he went.”

The ballad’s author compares Hale to a martyr. Hale is the victim much as all colonists are victims of the “…pale king of terrors…” The final stanza challenges King George III to, “go frighten the slave…,” referring to the king as a tyrant. Hale’s final act was to pray for his mother. Identifying the king with American slavery also figured in the initial Jeffersonian draft of the Declaration.

The tea party song references the destruction of tea in Boston harbor, although East India company tea was left to rot in other ports like Charleston. “Rally, Mohawks! Bring out your axes…”

The writer refers to the hated tea as “vile Bohea,” a term used for substandard tea. After dealing with the tea, the dissidents were urged to meet at the Green Dragon, a popular tavern in colonial Boston frequented by the Sons of Liberty.

The tea party became a symbol of outrage and concerted action against the king and Parliament. This theme was addressed in the 1774 ballad “Free America.”

Americans Inherited a Land of Opportunity and Freedom

“Free America,” attributed to Joseph Warren, begins with references to Ancient Greece and Rome. Americans had similar opportunities in the “paradise of pleasure.” America was “torn from a world of tyrants” in order to form a “new dominion.” In many ways, Warren’s observations were an extension of the Puritan “City on a Hill” vision. Warren also differentiates between the Europe of old and a new mission. If Europe emptied “all her force,” the colonists would “oppose, oppose…”

Although some ballads like Yankee Doodle and the Battle of the Kegs mocked the British, others told a story of freedom and courage. These songs became part of the independence story of a unique people. Added to a generation after the war by writers like Henry W. Longfellow and James F.Cooper, they perpetuated a drama still associated with the new birth of freedom.

The American Revolution not only created a new nation, but rejected the old orders of Europe. Rejecting the strict social classes in England may have been related to the sympathies of the English upper classes that tended to view colonials as provincials.

After 1783, this included the established Anglican Church (bishops in the House of Lords favored war, rejecting any conciliatory measures). Churchmen supporting independence included Methodists and other Protestant groups. The established, state church, however, supported Parliamentary policies.

Ballads help to better understand how the colonials saw themselves as well as their cause. Ballads reflected the thoughts of everyday Americans, willing to fight for what Warren called a “free America.”