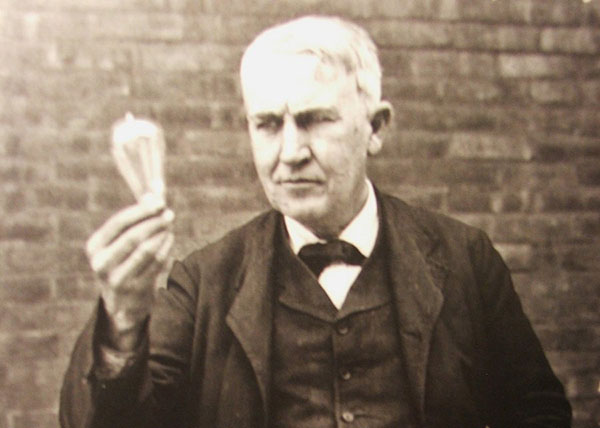 Greatest U.S. inventor lived in a time of entrepreneurial freedom without dealing with – as modern garage inventors do – stifling restrictions or overhead.

In his lifetime, Thomas Edison (1847-1931) obtained 1,093 American patents for his inventions. His most famous creations – the phonograph, the incandescent light bulb, the microphone and the moving picture camera – amazed the public and revolutionized how people lived. He was fortunate to live in an era of unrestricted entrepreneurial freedom.

Social studies curriculum (covering U.S. government and American history) is reviewed every ten years, and 2010 is one of those years. Education experts had proposed eliminating Thomas Edison from student history textbooks, along with Thomas Jefferson and Albert Einstein. But Edison remains in the history books as part of the story of American exceptionalism. After all, Edison is the greatest inventor in American history.

The U.S. patent system was formulated to do what no other patent system in the world had ever done before — to stimulate the inventiveness, genius and entrepreneurial output of the everyday American. This system was used in young America to generate industry and productivity.

For the first time in any nation’s constitution, an intellectual property clause that recognized the rights of inventors was included in the U.S. Constitution. The idea was to enable this right to benefit the common person. Patent fees were set at a level that any ordinary citizen could afford (initially at $3.70 and later at $30 where it remained for the next 70 years), ensuring that the patent system remained open to all citizens during the Industrial Revolution.

The Founders also greatly simplified administrative procedures for applying for a patent; for example anyone could apply for a patent by mail postage-free. Thus they created a patent system that encouraged innovation on a mass scale.

According to Popular Mechanics, today’s patent application process is not as ideal. The time it takes to fill out an application is prohibitive and the prospect of documenting the necessary but copious lab notes is daunting. Today no one would attempt getting a patent without a lawyer; when these legal fees are included, each patent costs as much as $15,000.

When he was a child, Thomas Edison’s teacher told his mother that he was addled and stupid and would never amount to anything. Fortunately his mother pulled him out of school and taught him at home. Because he was home-schooled and self-educated, as an adult:

As a hard-working taskmaster, he may not have been easy to live with, but his productivity transformed the U.S. into the world’s greatest industrial power.

One of Edison’s biggest strengths was his perseverance. He never gave up. When his experiments didn’t work out, he did not get discouraged but took the opportunity to continue making improvements.

Edison is famous for his quote that alludes to his dedication to hard work:

But many people don’t know that the complete quote includes:

Early patent laws created a market in which inventors with little up-front expense could sell their discoveries to companies that could market them. The system allowed many ordinary people to generate income from their inventions and make it a full-time career.

Due to restrictions and administrative costs, this is hardly possible for today’s garage inventor. When asked about his laboratory and about its regulations, Edison is said to have retorted, “Regulations? We’re trying to get something done here.”

Visitors to the Thomas A. Edison Birthplace Museum in Milan, Ohio, can hear the tale from a knowledgeable tour guide. The Birthplace Museum is open February through November and is located at 9 Edison Drive near Exit 118 of the Ohio Turnpike. Adult admission is $7.00 and well worth the price. Call them at 419-499-2135.