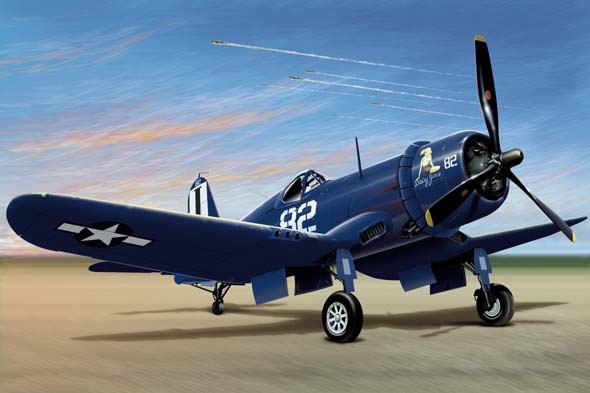 The lethal Vought F4U Corsair was one of the best, and most distinctive American fighter air crafts of World War II.

From its first deployment in the Pacific as both a carrier and, mostly, land based fighter, the F4U became one of the Japanese pilots’ worse nightmares. In the hand of U.S. Navy and Marine pilots it achieved an enviable 11 to 1 kill ration over its opponents. It also proved to be an excellent fighter-bomber. It was known by the enemy as Whistling Death.

Between 1942 and 1953 a total of 12,571 Corsair were built in 16 different configurations. No other U.S. built, piston engine powered fighter had a longer production run.

Early in 1938, the U.S. Navy asked for bids for a new single-engine fighter that would be armed by three or four machines guns; could carry bombs under the wings, had a 1,000 miles (1,600 Km) range and a stalling speed below 70 mph.

By midyear Vought had produced its prototype, the XF4U-1. Even though the early Corsairs were fast – the first single-engine American fighter to top 400 mph (640 km/h) – they had structural and design problems. The large propeller required a long landing gear, which proved too weak for the powerful but heavy Pratt & Whitney R-2800 engine. Furthermore, the cabin was too far forward and of the “birdcage” style. Both components reduced the pilot’s visibility, chiefly during landing.

Redesigning included the now famous “gull wing” set up, which reduced the size of the landing gear. The cabin was moved almost three feet forward and the metal frame was eliminated. In addition, armor plate was mounted around the cabin. The production version also included higher caliber machine guns; various control improvements and a more powerful version of the R-2800.

Late in 1942, the Corsair was cleared for service. At first the plane only operated from land bases. A tendency to bounce during landings will restrict the deployment to carrier duty. By the end of the conflict, the Corsair had flown 44 % of the more than 64,000 sorties by Marine and Navy fighters but only 15 % of the close to 10,000 flown from aircraft carriers. This made the Corsair more of a Marine fighter than a Navy one.

Corsairs participated in many of the most famous and bloody battles in the Pacific Theater including Guadalcanal, Marianas, Philippines and Okinawa. In many of these operations the F4U proved to be an able support bomber and was used as such in numerous occasions.

The Corsairs was the workhorse of such famous squadrons as the Navy’s VF-17, the Jolly Rogers. However, today it is better known as the fighter flown by the legendary Marine’s VMF-214 squadron, the Black Sheep, commanded by Major Gregory “Pappy” Boyington

While it had some maintenance problems, the Corsair proved so efficient and durable that more than 30 variants were manufactured in a 21 year production run.

After World War II the Corsairs continue serving the U.S. Navy as well as the New Zealand Air Force and the Royal Navy. Argentina, France, Honduras and El Salvador also acquired Corsairs after the war.

The fighter saw action in many post war conflicts such as the First Indochina War, Suez Crisis, Algerian War the Tunisian Independence War and Vietnam.

The last conflict in which the F4Ur saw action was the so called Football War, between Honduras and El Salvador. Both sides flew Corsairs. Only three planes – all Salvadorian – were shot down during the hostilities. Honduran Captain Fernando Soto at the controls of a Corsair was credited with the three kills.

The P-51 Mustang: The War-Bird that defeated the Luftwaffe

Japanese Balloon Bombs of WWII: The Empire of Japan’s use of one way free balloons to bomb the US

The German Invasion and Occupation of Greece, 1941- 44