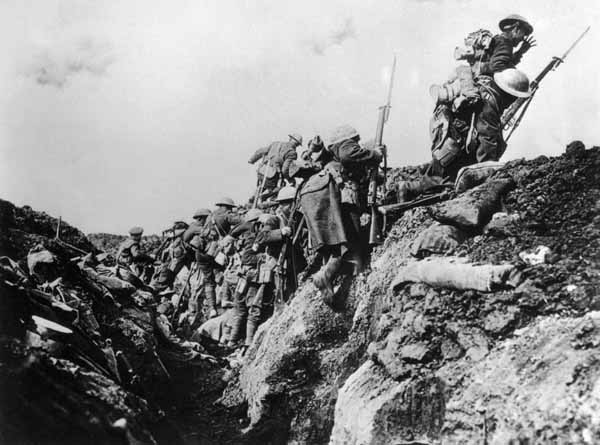 The Western Front. A series of trenches that eventually stretched 440 miles from the North Sea coastline of France, to the country’s border with Switzerland.

The initial beginning of trench warfare, both defensive and offensive, began after the Battle of the Marne in 1914. The Germans, having failed in their attempt to secure the surrender of the French decided to literally ‘dig themselves in.’ They did not want to surrender any ground that they had obtained during their initial offensive, so they dug trenches in order to protect themselves from the advancing Allied forces.

The Allies failed to dislodge the German Army, so followed their example and proceeded to dig their own trenches.

Two opposing front-line trenches, topped with sandbags and barbed wire. The basic pattern was in the form of a repeated zig-zag to prevent the enemy from firing directly down the trenches.

The wasteland separating the Allied and the German forces gained the term ‘no man’s land’ due to its inhumane vision of a desolate land covered in corpses, craters, and the general carnage of heavy bombardment and fighting.

Due to the nature of this type of warfare any offensive actions by both sides usually culminated in a stalemate, with little or no ground gained by the attacking force, and the exceptionally high loss of life.

Communication trenches connected the front-line with the reserve and support trenches. They were multi-purpose in allowing for the movement of men and general supplies and the retrieval of the wounded.

Life in the trenches proved to be a harrowing experience. The combination of death and disease infiltrated every quarter. Aside from the risk of the attack from the enemy, the infantry faced the ordeal of lice, rats, the stench of rotting corpses and the general unhygienic living conditions that resulted in the confined spaces of trench warfare.

The objectives of trench warfare lay with its use as an attacking position, against its parallel use of a defensive line.

When each side initiated an attack they would line the trench walls and await the signal to attack. The purpose of this was to use their combined forces to attack the enemy, with the principal objective of overpowering the enemies trenches and gaining territory.

This meant crossing the area of ‘no man’s land’ whereby the enemy were usually able to project defensive fire in the form of shell fire, machine guns and rifles, plus the use of poison gas.

As there was no protection within the open space between the trenches, the attacking force came under heavy, concentrated fire, resulting in high casualties.

A classic example of this was with the Battle of the Somme. The French and British forces began the major offensive on July 1st 1916. Within twenty four hours the Allied forces had over 15,000 casualties, including 19,240 dead, making it the costliest day in British Army history.

The Somme offensive would continue through the summer months until November 1916, and the combined casualties would reach 1.5 million.