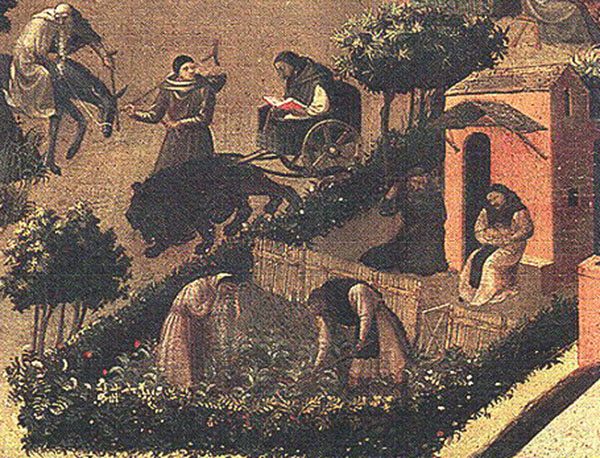 The life of a medieval monk followed a strict pattern. The days consisted of a routine of religious services, manual labour, and sleep, varying only on feast days.

The life of a medieval monk centred around prayer and religious observance. From the first service of the day to the last prayers at night, each 24 hour period followed the same pattern. The only time the routine was broken was on special Church feast days such as Easter and Christmas, when extra luxuries, such as more meat or ale, might be allowed in celebration.

Daily Life in a Medieval Monastery

A monk’s day began before sunrise, when he was summoned for Matins, the first service of the day, at around 2am. The monks left their dormitory and processed down the night stair with candles, entering the dark church to sing the first service.

After this, the monks returned to bed, to rest until Prime, the service which greeted the breaking of dawn, after which a simple of breakfast of bread and ale was served. At 9am, the service of Terce was celebrated.

The monks met in the Chapter House each day for discussion of any daily business, including matters of discipline, any problems within the monastery and announcements from the outside world which affected the community, for example, the death of a monarch or patron. Meals were eaten with the accompaniment of a reading from the Bible.

The Religious Services in a Medieval Monastery

Sext was the main service of the day at noon, which was followed by a period of private study and contemplation. Monks were discouraged from excessive socialising, and instead expected to focus their energies on prayer and contemplation. Nones was recited at 3pm,

The final services of the day were Vespers, in the early evening and Compline, the final service of the day. Each of these ceremonies were accompanied by singing and chanting from the monks, following prayers and hymns learned by heart and sung by generation after generation of monks. Monks retired to bed early, ready to begin another day of prayer and contemplation with Matins, just seven hours later.

Each of these religious services had its own prayers and hymns, which were repeated day after day, with variations only on religious feast days. Psalms, Bible readings and Latin prayers would have been familiar to the monks who heard these words each day.

What Work Did Monks Do in a Medieval Monastery?

The type of work carried out by monks in a medieval monastery depended upon the resources of the monastery and the religious order to which the monastery belonged. Early in its history, until the eleventh century, the Cistercian Order encouraged monks to carry out manual labour, in accordance with the Rule of St Benedict. This meant that all members of the community, except the sick and elderly, were expected to carry out tasks within the monastery or on its lands, including harvesting, planting, caring for the monastery’s animals, brewing or working in the kitchen.

Later, the Order began to rely on lay brothers to carry out manual labour, freeing the monks for more prayer and contemplations. Each monk’s labour would be replaced by further prayer times, or indoor occupations such as working in the scriptorium or the monastery’s infirmary. At all times, the work carried out was expected to be worthwhile and in keeping with the monastic ideal of poverty, obedience and chastity.