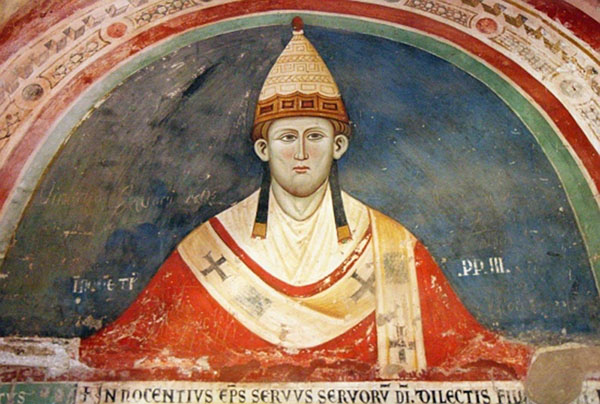 The time of Pope Innocent III is a struggle between secular and religious powers. Through his reign, the Roman Catholic Church came to dominate medieval Europe.

The time of Pope Innocent III is marked by struggle between secular and religious powers. No single secular power controlled Europe. The area, marred by constant warfare, was coming together under one religion: Christendom. This unifying force was under the hand of one man, the Pope. Many historians look at the pontificate of Innocent III as the climax of medieval papacy. Yet not all of Europe yielded to the Holy Roman Church, most notably parts of southern France. Pope Innocent III, in an effort to secure his power throughout all of Europe, called a crusade against the heretics of the region.

Pope Innocent III and the Threat of Albigensian Heretics

The spread of heresy was a concern following the failures of the previous two “Crusades” to the Holy Land. As some Crusaders realized that the Muslims were not at barbaric as they had been told, they began to intermarry and even convert. This led to an environment ripe for tolerance, and hence, heresy. Pope Innocent III called the secular powers accountable to him for the suppression of heresy, writing “We decree that those who give credence to the teachings of the heretics, as well as those who receive, defend, and patronize them, are excommunicated.”

These heretics, if organized, were a huge threat to the Church. That threat was personified in the Count of Toulouse who allowed heretics, specifically the Albigensians, to run unmolested throughout his empire.

The Albigensian religion did not descend from any form of Christianity; therefore, it differed so remarkably that the people of Toulouse County could not relate with the religion being thrust upon them. Bernard Gui, an inquisitor writing in the early 14th century, tells of the Albigensian bafflement at the Christian sacrament of baptism: “Of baptism, they assert that the water is material and corruptible and is therefore the creation of the evil power, and cannot sanctify the soul, but that the churchmen sell this water out of avarice, just as they sell earth for the burial of the dead, and oil to the sick when they anoint them, and as: they sell the confession of sins as made to the priests.”

A large part of the danger lay in the fact that the Christians were more inclined to accept Albigensian beliefs, or at least tolerate them, than the reverse.

The south of France contained a lot of wealth, granted mainly by the large Jewish population in the region. Innocent III recognized this connection and forbade violence to be used against the Jewish people in 1199. The heretical culture, however, proved too dangerous to be ignored and was addressed by the all-out crusade against Albigensians. With heretics eliminated and Jews isolated, Pope Innocent III saw that wealth and further power would start to trickle into the Holy Roman Church.

First, the Pope looked to Philip Augustus of France to militarily remove the Count of Toulouse as punishment for allowing heresies to take place in his county. Philip refused several times, citing more pressing issues with England. In 1208, Innocent III got an excuse when the papal legate to the Count, Pierre de Castelnau, was assassinated in Toulouse. The Count, Raymond VI, although never formally found as a heretic, was punished by the Church for this offense. The Pope released his fiefs from their allegiance and called for knights from elsewhere to occupy his county. Naturally, Philip Augustus claimed his sole right to occupy the county in such circumstances and did his best to defend Raymond. The Count tried to recant and promised to suppress heresy, however it was too late. The slogan, “Kill them all, God will know His own,” demonstrated the unbiased and brutal nature with which the town of Béziers was taken. Eventually after several more massacres, Simon de Montfort, acting as papal legate, controlled most of the county.

Regardless of the brutality, Innocent III used the outcome to his advantage and took control of secular power in the region. The Crusade accomplished several objectives. It broke the Albigensians, it placed a leader faithful to the Pope in control, and it gave Innocent a priceless bargaining chip. De Montfort was hated in the south of the France and stability in the area was waning. Raymond’s submission to the Pope meant he could return lands or, as was decided in 1229, give them to the French crown to be inherited by Raymond’s sons.

With the entire of Europe swearing, at least in pretenses, allegiance to the Holy Roman Church, Pope Innocent III set about establishing order with the Canons of the Fourth Lateran Council in 1215. This document placed the Church over the secular powers and gave ultimate authority to the Pope. The Council included delegates from all over Europe, in numbers not seen since the Nicaea Council.

The real importance of the Council lay in the crown and seal placed by it upon papal supremacy in the Church and upon ecclesiastical supremacy in the lives of all men, together with the subtle but clear implication of papal infallibility. This achievement, on such a scale, was made possible by Pope Innocent III’s actions in the south of France. His ability to send violence upon those who ignored his will indicated exactly where the papal authority stood. Although, the office would never again attain such heights, the Fourth Lateran Council and the way it came to pass was a legacy Innocent left for the generations to follow.