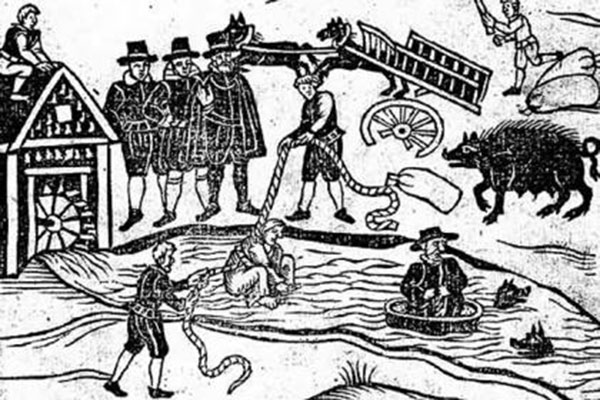 Medieval people struggled with lies and truth, as do modern people, but in their courts they could always stoke the fire, fill the cauldron-and let God sort it out.

Judicial ‘ordeals’ were used when there was no other means of ascertaining guilt or innocence in the criminal proceedings of the Middle Ages. Other means such as oath-swearing and witness statements were unavailable to slaves, foreigners or to the ‘outsworn’ (those of insufficient reputation to swear oaths), and so the ordeal tended to be used more often against low-status people.

Trial by ordeal appears in the earliest codes such as the Sumerian Code of Ur Nammu (circa 2100BC). Laws thirteen and fourteen of this code order a ‘river ordeal’ in two specific cases, for those accused of sorcery and for women accused of adultery. In this ordeal, the accused entered a river and tried to stay below the surface while an arrow was loosed at her.

Much later, a Christianised Europe took to the ordeal with gusto.

The earliest European mention of the ordeal occurs in Salic law of 510CE and concerns the ‘ordeal of the cauldron’. Gregory of Tours tells [in De gloria martyrum circa 890CE] how the cauldron would be heated until the water ‘boiled fiercely, [then] a little ring was tossed into the hot water’. The ordealist plunged his hand into the water and tried to retrieve the ring, his innocence or guilt resting upon his pain threshold.

After 800CE the ordeal spread outward from Frankish areas, and is associated in northern Europe with Christian conversion. The Danes, for instance, abolished their traditional pagan duel in favour of Christian trial by hot iron. Some areas seem to have escaped the ordeals as some parts of Europe mystifyingly escaped raging plagues. There is no mention of the ordeal in the laws of Burgundy, Kent or Bavaria.

What Were the Ordeals?

By the time of Charlemagne’s Christian empire the ordeals were many and various:

What did the Ordeals Prove?

The ordeals were used to ascertain the truth in unwitnessed or ‘invisible’ cases including:

Plainly ordeals did not give the actual truth, but the virtual truth they provided was absolute and offered small, superstitious communities the possibility of reaching consensus on such socially destabilising events as murder. They offered the possibility of closure in matters such as adultery and in matters of faith, cleared up points of theology that would otherwise go unsettled and produce battles.

Still, Charlemagne had to command that ‘all believe in the ordeal without any doubting’—inferring that there were doubters. The ordeals lessened and all but vanished over the 1200s as populations grew, communities became impersonal and literacy increased.