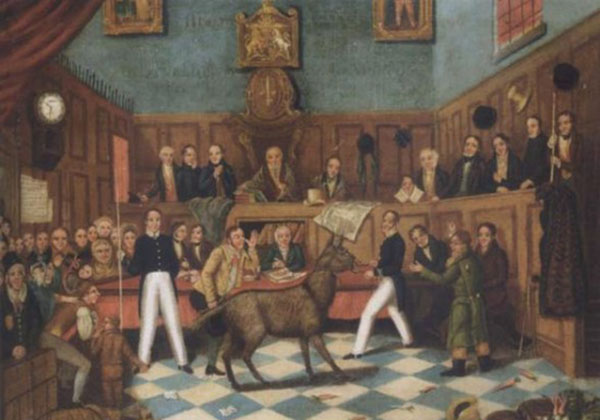 Medieval law tried bug swarms and entire classes of animals in serious church courts they failed to attend, before sentencing them to biblical curses that failed to work.

During the Middle Ages rodents, birds, flies, termites, grasshoppers, eels and snakes were arraigned for destroying crops, eating stores, and other crimes against humanity. The earliest documented animal prosecution took place in the Aosta Valley, Italy, in 824CE when a group of moles were excommunicated for ruining fields, and they lasted into the twentieth century

Rather than diminishing as Europe came out of what has traditionally been called the dark ages, the practice spread, eventually splitting into the secular animal trials which sent domestic animals to the gallows or stake. The trials reached their peak in the1600s along with another peaking phenomenon, that of the witch trials.

An aggrieved community whose crops were being devoured by locusts, or whose dwellings were plagued by flies or frogs, would petition their local bishop for help. An investigator was sent to see the alleged damage, and the court then prayed for the creatures to leave or desist. If the prayers failed the entire class of animal would be ordered to appear at court on a given date.

An infestation of cockchafer larvae endangering the stores in Berne, Switzerland, in 1478 received a summons to “appear before the bishop in order to tell their story”. The Bishop later said he’d “heard the vicious and abominable answer” of the cockchafers, who hadn’t appeared.

When the animals didn’t appear in court, they would be tried in absentia. The offending animals were appointed a procurator who would argue on their behalf. He could call witnesses, even character witnesses, who could also be cross-examined. In 1713 an infestation of termites at a Franciscan monastery in Brazil was tried for destruction of church property. Their procurator witnessed to the industry of his clients, even suggesting that “in the matter of such they were superior” to the friars themselves. Such defences were entirely sincere.

If animals were found guilty they were ordered to leave the area within six days. As often happened with the exile of human groups, leniency was shown to the very young, very old, the sick and pregnant with an extension of time to depart. If the animals failed to leave they were damned to Hell with full biblical authority and the gravest of attitudes.

It was common for one of the miscreant animals to be caught, brought into court as an example, and killed publicly as the curse was being pronounced.

The trouble with the cursing of animals, even full anathematisation, is that it doesn’t work but such universal and obvious failure did not stop the trials. The medieval Church often blamed stubborn communal wickedness for the failed curses, and church taxes would be increased as penance. It was well-known that curses were greatly fortified by high tithes.

There was the odd exception to this failure of the process. In Foigny, France, a swarm of gnats hatched out in their abbey church, choking the air and revolting the devotees. John the Lamb anathematised the swarm and within twenty-four hours, ‘Lo … they were all dead corpses’. This sort of random success only served to reinforce the superstition.

Several rats and beetles defended by ingenious lawyers, such as Bartholomew Chassenée, won famous court victories but, plainly, they wouldn’t have known of their triumph. They were in the fields, un-selfconsciously swarming.