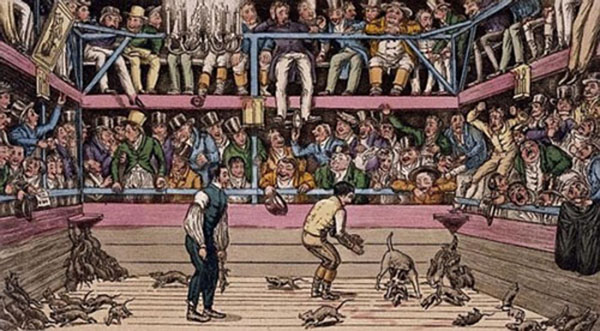 In the Middle Ages animals were tried in local courts for crimes ranging from theft and vandalism, to homicide and sexual perversion: after which they were often executed .

The earliest existing documented case is that of an infanticidal pig. In 1266 Fontenay-aux-Roses (France) a pig was tried for eating a child, and on being found guilty was publicly burnt by order of the monks of St Genevieve. The last known animal trial was held in Délémont (Switzerland) in 1906.

Medieval documentation is patchy prior to the 1200s, so the extant records may represent just the tip of an unpleasant iceberg.* Simultaneous to the spread of the animal trials, torture was introduced into church courts and witchcraft trials took off.

Animals and Secular vs Church Courts

The local, secular animal trials differed from the trial and ‘cursing’ of animals in medieval Church trials. Local courts generally tried individual domestic animals, while the Church dealt with wild animals and swarming insects. Occasionally they tried a werewolf, but always in human form.

Defence lawyers were not appointed, as they were in church courts, and a judge alone oversaw the trial, calling and questioning witnesses, sifting evidence and finally making his judgment. Sentencing in secular courts meant a corporeal, not a spiritual, punishment and commonly that punishment was death.

This didn’t necessarily mean that the Church Courts wouldn’t have liked to execute their undomesticated miscreants; they just couldn’t get at them. Later witch trials saw both the witches and their animal familiars tortured, and executed.

Medieval pigs were widely persecuted by prosecutions due to an unlucky biblical association with demonic possession [Matt. 8:28–34]. They lived close to humans, roaming freely and often sleeping in the same rooms where they would sometimes indelicately snack on small children.

In 1457 five-year-old Jehan Martin was murdered and partly eaten by eight pigs. The court demanded death for all eight who, by the way, showed no remorse. The court agreed to the execution of the sow, but showed mercy to her piglet gang who were still very young. Their owner, however, did not want them back.

On Hanging the Animals

It was illegal to execute without trial so the animals must have one, and be seen to have one. Trials seem to have been entirely sincere, following all the form and ritual of human trials, and trials were expensive. Animal and human prisoners cost the same to detain and feed. Those bound for the gallows, pig or man, were hanged by a hangman clad in brand-new gloves; not cheap.

Animals received the same punishments as people. If convicted of murder, pigs, cows, horses and dogs could be burnt at the stake, hanged, or buried alive. To hang a horse or bull was not a simple matter. Usually the hangman used tree limbs, but occasionally they would build a huge gallows. Sometimes the animals were dressed in human clothes.

Not only has the medieval mind suffered from such confusion of categories. In 1986, in Malacca (Malaysia) a group of men beat to death a dog they believed to be one of a bandit gang who changed themselves into dogs.

England has no recorded cases of the medieval secular animal trials. Continental European complainants only had to convince one judge to get a hanging result, but in England 23 jurors, a judge and 12 others would need to unanimously agree before any execution could proceed. This would plainly complicate matters.

They did, however, prosecute corpses and inanimate objects.