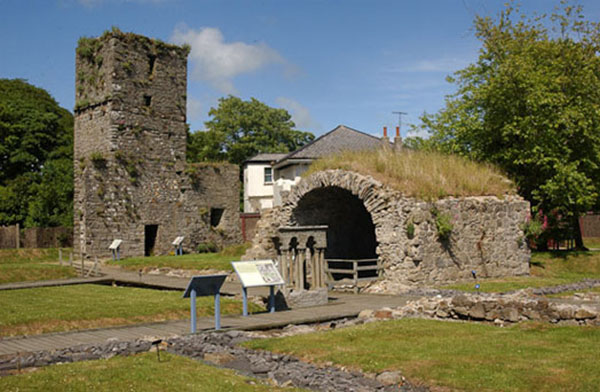 The medieval abbey is still the subject of research and speculation, with excavations ongoing at the abbey. Since the abbey came under the ownership of Manx National Heritage in 1998, the site’s monastic remains have been carefully preserved and new archaeological evidence discovered, which sheds further light on the abbey’s medieval past.

The Founding of Rushen Abbey, Isle of Man

The abbey was founded in 1134, through a gift of land given from Olaf I, King of Man. Monks from Furness Abbey in Cumbria, England, crossed the Irish Sea to found the new monastery, bringing with them a new way of life to the island.

The new foundation was a success, with monks soon recruited from the island. In 1147, Rushen Abbey was accepted into the Cistercian Order, making the community part of a Europe-wide institution. The abbot at Rushen Abbey, as well as running the Cistercian monastery, also held the position of Deputy Governor of the Isle of Man.

This meant that he held great political and economic power, something which placed the abbey in a strong position. Rushen Abbey was run using the popular grange system, whereby lay brothers helped farm the land, supporting the monastic community through the produce they farmed, and selling on any surplus to benefit the whole community.

So successful was the monastic estate at Rushen that extensive trade with the outside world was possible. At the height of the abbey’s success, a packhorse bridge was built across the Silverburn River, which still exists today. Built in around 1350 from blocks of limestone, the bridge incorporates two pointed arches and is wide enough for a laden packhorse to bring goods to and from the monastery.

The Chronicles of the Kings of Mann and the Isles

The Chronicles of the Kings of Mann and the Isles is a medieval document, which is believed to be the only surviving medieval document which depicts the history of the island from a Manx perspective. It was this chronicle which depicted the next turbulent chapter in the abbey’s history.

Although the abbey was intended to be a peaceful and tranquil place, the history of Rushen Abbey has not always been a smooth one. In 1316, the abbey was attacked by Irish raiders who, according to records, took all the abbey’s furnishings and livestock, leaving the community with nothing. Although life at the monastery continued after the raid, just six monks remained in 1540 at the Dissolution of the Monasteries. The abbey’s assets at this time included 26 horses, 128 cattle and 82 sheep.

During the medieval age, Rushen Abbey fulfilled an important role on the island, ensuring that the souls of patrons and their families were prayed for. At least three Kings of Man are buried on the site – Olaf II, Reginald II and Magnus.