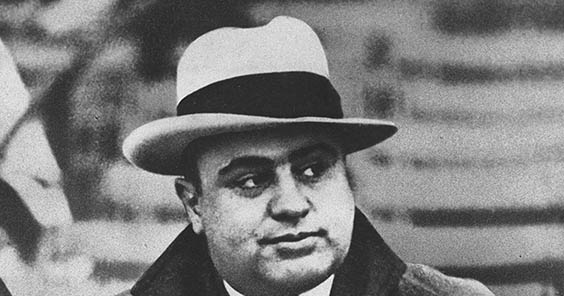 Just the name Al Capone connotes the dark and seamy underworld of mobsters, prohibition, Elliot Ness and gangland killings. But who was this brilliant Mafia crime boss gangster and did you know that the word “capone” in Italian is slang for big boss?

Born in Brooklyn, New York on January 17, 1899, Alphonse Gabriel Capone began his career in crime very early in his life. One of nine children born to hard-working Italian immigrants, Al Capone and two of his brothers were drawn to careers in crime. The other Capone children chose honest life styles and some even changed their surnames so as not to be associated with their gangster brother.

After quitting school as a teenager, Al Capone drifted into the world of gangs, eventually joining Frankie Yale’s notorious “Five Points.” It was while working at one of Yale’s clubs that Al Capone clashed with a gangster named Galucio who slashed his face in a dispute over the latter’s sister. He hated the resulting nickname of “Scarface,” opting instead for “Snorky,” which meant well dressed in 1920s gangster slang.

Prohibition and The Big Time

Al Capone controlled the Chicago underworld and often clashed with his rivals,Bugs Moran and Hymie Weiss. It was estimated that from all of Al Capone’s illegal enterprises including prostitution, gambling and alcohol, he took in about 100 million dollars a year! In 1928 Al Capone bought a retreat on Palm Island, Florida and from this comfortable perch planned the details of what would be known as “St. Valentine’s Day Massacre” He hoped to thus eliminate his gangster rival for control over the north side of Chicago, but Bugs Moran, who was actually late for the meeting, escaped.

In 1927 new tax evasion laws became grounds for conviction against Al Capone and Treasury agent, Elliot Ness, made the charges stick. Al Capone was found guilty and sentenced to 11 years in a federal prison in Atlanta. But he could still control his “kingdom,” and so Al Capone was transferred to Alcatraz where his empire began to crumble. In the 1930s he began showing signs of dementia, which was probably caused by untreated syphilis, which he had contracted many years before. Al Capone died a broken, harmless and insane man on January 24, 1947 at the age of 48.

In the end, crime didn’t pay for Alphonse Gabriel Capone.

The Turing Test and Philosophies of Alan Turing