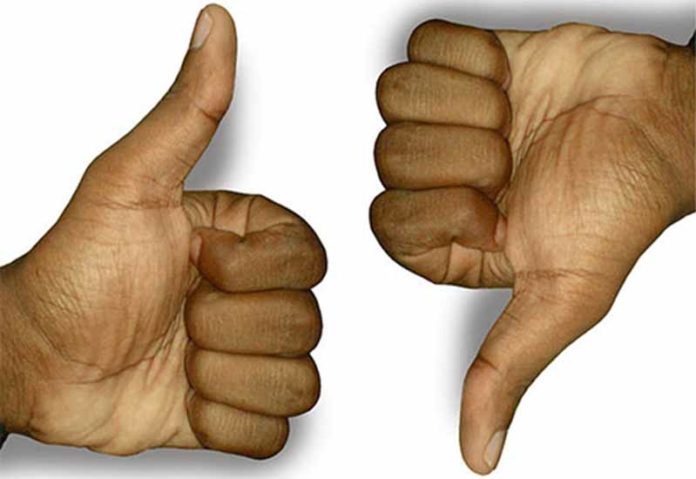 Thumbs up in some cultures is a sign of approval, while in others, it is a sign of disrespect. Where did it come from?

The genesis of thumbs up or down can be traced as far back to ancient Rome, Egypt and Etruria. The usual mental perception of it always takes us to visions of the ancient city – state of Rome, one of the most power ancient cities in the history of humanity, and gladiator – styled battles. We associate the thumbs up or down gesture, no doubt, with those bloody gladiator matches often occurring inside the coliseums of Rome as amusement. The masses of people would linger for the life or death indication from the head of state a portentous duel thumb (thumbs up or down.) This would end the bloody festivities. Sometimes the gladiator was spared, but every so often, a thumbs up would signal his death.

The crowd, every now and then, would have an influence on the decision making process of the dueling thumbs. For example, if a gladiator fought fiercely enough and entertained the crowd, if by some weird circumstance, the gladiator loses the match; why not have him back again to prove his worth? These things may have occurred, but the dreaded thumbs down most – likely occurred because gladiators, before they were fighters, were indeed condemned men in Roman society.

When ancient history is examined involving ancient Italy, not enough credit is given to the Etruscans. Not far from Rome lie Etruria. This was a mirror rival society existing within the central Italian region. They would wage war against their Roman neighbors in the Roman – Etruscan Wars for over two centuries. Rome would eventually become victorious and add Etruria to Roman hegemony. It is believed that the Etruscans were noted for using thumbs up or down which predate that of the Roman use.

But the misinterpretation of thumbs up to let a gladiator live and thumbs down to signify the death of the gladiator is credited to the acclaimed French artist Jean – Leon Gerome (1824 – 1904). In one of Gerome’s paintings called Police Verco (1872) that image stuck and remained a mental fixture inside of Western society when it could have been the opposite. The Police Verco painting sits in the Phoenix Art Museum.

Dueling Thumbs in the Media

Needless to say, thumbs up or down have been popular among the world media circuit, especially inside of Hollywood films such as Gladiator (2000) and Action in the North Atlantic (1943). Among the movie circuit, famous film critics Roger Ebert and his former sidekick Gene Siskel, would consistently give their reviews on movies following them with thumbs up or down to signal their approval or disapproval.

Thumbs up and down is also included in Facebook, a popular social media used to decide if users agree or disagree with published comments.

Origin of Weekday Names for Latin-based Languages: Learning How the Days of the Week Were Named