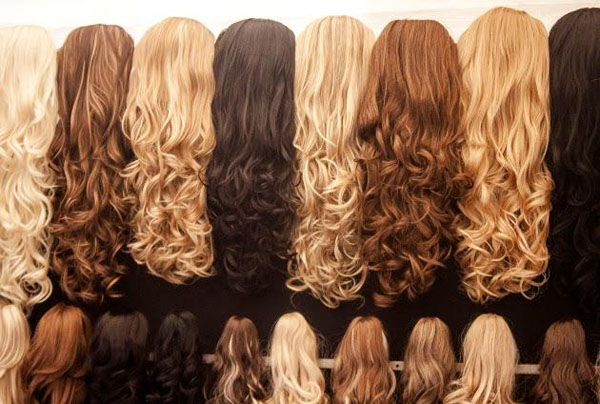 Many women in America who have at one time or another worn fake hair. Whether it is a hair piece, extensions, or maybe just a wig for Halloween, fake hair is a large part of our culture. The origins of wigs and hair pieces come to America from across the ocean. In Egypt some 1500 years ago, the Egyptians started the concept of using artificial hair. When it was first invented, the purpose of a wig was to complement festive and/or holiday attire.

In many museums, Egyptian wigs are on display today. Historians have chemically analyzed the wigs and discovered the wigs were made from vegetable and human hair. Some of the pieces during that time were enormous and weighty. Documents have stated that the wig Queen Isimkheb wore in 900 B.C. was so heavy that she needed attendants to help her walk. This wig is currently in the Cairo Museum and is massive. It was tested and found to be made entirely of human hair and covered, as other wigs of that time, with beeswax.

In Rome wigs became very popular during the first century B.C., while the Greek courtesans preferred bleaching or powdering their own hair, Roman women opted for the beautiful blonde hair of their German captives. Ovid, the Roman poet of the first-century wrote that the Roman’s never had to worry about being bald considering the amount of German hair that could be scalped.

Eventually blond wigs became the trademark of prostitutes in Rome. Messalina, an empress of this time wore a yellow wig when she toured the brothels of Rome. Even Caligula, one of the most detested of Rome’s rulers, would wear a blond wig when he cruised the streets looking for pleasure.

It became apparent that wigs signaled debauchery and lewdness. So the Christian Church tried repeatedly in the first century to ban the wearing of wigs. It went as far as church fathers ruling that a person in a wig could not receive a church blessing. Even into the next century wig wearers could not attend Bishop Cyprian’s church. This extreme condemnation hit its peak in A.D. 692. This was the year that the Council of Constantinople excommunicated any Christians who wore a wig.

The Reformation and Wigs

It took the Reformation of 1517 for the limitations and laws on wigs to be lifted. So as early as 1580 wigs were the rage in hair fashion. The person who kick started this fad was Elizabeth I, who wore wigs constantly to cover a receding hairline and very thin hair. During this time wigs were so commonplace they went practically unnoticed. It was noted that Mary, Queen of Scots, wore a wig but it went completely unnoticed until she was beheaded. When the popularity of wigs soared during the seventeenth-century in France, one wig shop employed forty full-time wigmakers.

The Church tried to ban wigs again, but in the seventeenth-century, the priests were divided, because many of the clergy wore the fashionable curly wigs of the time. This caused a rift among the priest putting wig lovers against wig haters. The Church finally stepped in and offered a compromise. Wigs were allowed on laymen and priest who were bald, infirm, or elderly. Women could not wear them at all.

In London, during the eighteenth –century lawyers wore wigs and this practice is still in effect. In America, wigs became popular during colonial times and many of the founding fathers can be observed in portraits wearing powdered wigs. During the swinging 60’s the “fall” became a standard to add length to an otherwise short haircut.

Currently wigs are still around but it is the extensions that are the mainstay of the hairpiece industry. Whether it is clip-ins like the ones offered by Jessica Simpson or the beautiful variation of pieces sold by Raquel Welch and Jaclyn Smith, fake hair is part of modern life.

The Origins of Thumbs Up or Down: Life or Death