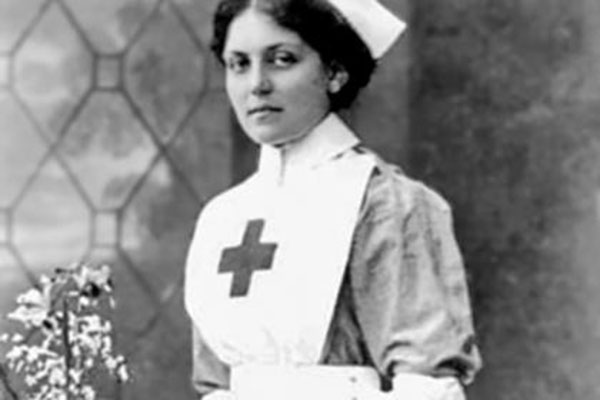 Violet Jessop was an ocean liner stewardess and nurse who survived the sinking of the Titanic in 1912 and the sinking of its sister ship, Britannic,in 1916. Remarkably, she was also on board its other sister ship, Olympic, when it collided with the warship HMS Hawke in 1911.

Violet Jessop was born in October 1887 in Bahia Blanca, Argentina, to Irish emigrant parents. After her sheep farming father died, she and her family repatriated to England. Violet was educated at a convent school in London, before training later as a nurse.

In need of money when her mother became ill, Violet successfully applied to become an ocean liner stewardess. In 1910, working for the White Star Line, she was chosen to work as a First Class stewardess on the maiden voyage of The Olympic. Olympic was the largest civilian liner of its time, being almost 100 feet longer than any previous liner.

Violet was on board when, on 20th September 1911, the Olympic collided with the British Royal Navy warship, Hawke, off the Isle of Wight. Despite considerable damage, including the flooding of two of her watertight compartments and a twisted propeller shaft, Olympic was able to make her way slowly back to her home port of nearby Southampton. The Royal Navy laid the blame for the incident firmly at the door of the White Star Line, alleging that the Olympic’s large displacement generated such suction as to pull Hawke into her.

Her year on the Olympic over, Violet found herself again as a First Class stewardess on board the Titanic as she began her maiden voyage on 10th April 1912. As she described in her memoirs, “Gently, Titanic disengaged herself from the side of the dock and we were off on a soft April day…A new scene had opened for us on that bright spring day; who could foretell whether it would be farce, sweet comedy, or tragedy?”

The sinking of the Titanic

Four days later, at around eleven forty in the evening on 14th April 1912, the ‘unsinkable’ liner struck an iceberg.

“Crash!” Violet wrote…”Then a low, rending, crunching, ripping sound, as Titanic shivered a trifle and the sound of her engines gently ceased.”

In her memoirs, Violet describes how, having been informed that the ship was sinking, she argued with a colleague about the type of hat and coat to wear in a lifeboat; she wrote of how she watched the crew ready and lower the lifeboats. She noted, though, of how nobody seemed to be taking the matter seriously.

“I passed a group of officers, still in their mess jackets, hands in pockets…They smiled at me and I waved back.”

As the ship’s band played ‘Nearer My God to Thee’, Violet was ordered into lifeboat 16 and given a baby to look after. She watched the decks reduce in number as the great ship settled slowly lower in the water.

“I sat paralysed with cold and misery as I watched Titanic give a lurch forward. One of the huge funnels toppled off like a cardboard model…then she went down by the head with a thundering roar of underwater explosions…”

The following morning, the RMS Carpathia, which had been steaming towards them at full speed throughout the night, rescued Violet and the remaining survivors.

His Majesty’s Hospital Ship Britannic sunk by German mine

During the First World War, Violet trained as a nurse before working for the British Red Cross. In 1916, she was serving on board His Majesty’s Hospital Ship Britannic in the Aegean Sea when it struck a mine and sank on November 21st. Violet had to jump from a lifeboat to avoid being sucked into the ship’s propellers. She was later rescued by another lifeboat.

Before leaving Britannic, Violet had made sure to take her toothbrush with her, as friends had made fun of her on The Carpathia for complaining about the lack of a decent toothbrush! One friend in particular advised her at the time, “Never undertake another disaster without first making sure of your toothbrush.”

Many years later, when Violet had retired to Great Ashfield in Suffolk, England, she received a late night phone call.

“’Is this the Violet Jessop who was a stewardess on the Titanic and rescued a baby?’

‘Yes, it is,’ answered Violet.

The woman laughed, ‘I was that baby,’ she said and hung up. She never called back.”

Her biographer, John Maxtone-Graham, suggested that it was most likely a prank. But Violet replied, “No, John. I had never told that story to anyone before I told you now.”

Anyone with even a passing interest in the fascinating story of the tragic sinking of the Titanic should read ‘Titanic Survivor – The Memoirs of Violet Jessop, Stewardess’ edited by John Maxtone-Graham (Sutton House) and ‘The Story of the Titanic as told by its survivors’ (Dover Publications).