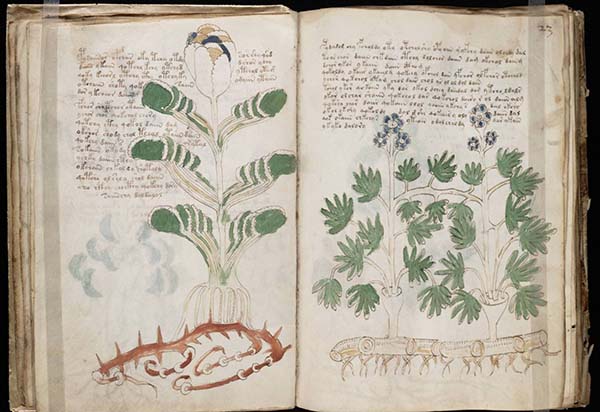 The Voynich Manuscript is a mysterious written work completed in a language or code that has been unidentifiable for hundreds of years.

Like something out of a Hollywood movie, the Voynich Manuscript is a mysterious text that has defied explanation for hundreds of years. The text is a collection of some 270 pages of handwritten notes and crude drawings completed in a an unknown alphabet, language, or code. Many experts have attempted to identify the language or decipher the code but, to this date, none has succeeded.

The Voynich Manuscript, named for the antique book dealer who discovered it in 1912, was brought to the United States by the same man to be deciphered. Now, almost 100 years later, it still stands as the most elusive enigma in the world of cryptography. Not a single word of this ‘Most Mysterious Manuscript’, written probably in the first half of the 15th Century, can be understood. (Zandbergen, Rene, 2010)

Text and Illustrations Within the Work

The text itself currently stands at 240 pages although gaps in numbering suggest an original page count closer to 272. (Pelling, Nicholas John. “The Curse of the Voynich: The Secret History of the World’s Most Mysterious Manuscript”. Compelling Press, 2006.) The text was clearly written from left to right, with a slightly ragged right margin. Longer sections are broken into paragraphs, sometimes with star- or flower-like notations in the left margin. Statistical analysis of the text reveals patterns similar to those of known languages. (Pelling) However, the text seems to be more repetitive than typical European languages; there are instances where the same common word appears up to three times in a row. Words that differ only by one letter also repeat with unusual frequency, causing single substitution alphabet decipherments to yield babble-like text. Also at issue with the text, there are practically no words comprising more than ten characters, yet there are also few one- or two-letter words. The distribution of letters within words is also noted as rather peculiar. For instance, some characters only occur at the beginning of a word, some only at the end, and some always in the middle portion. (Friedman, Elizebeth. 1962. “The Most Mysterious MS. – Still an Enigma”. Washington D.C. Post, 5 August, E1, E5. Quoted in Mary D’Imperio’s “Elegant Enigma”, p.27)

The illustrations which proliferate the work shed little light on the precise nature of its text but imply that the book consists of six “sections”, with different styles and subject matter. Except for the last section, which contains only text, almost every page contains at least one illustration. The six sections have been labeled: herbal, astronomical, biological, cosmological, pharmaceutical, and recipes. These labels have been determined based on the illustrations contained in each section.

According to Deutsch Presse, in 2009, University of Arizona researchers performed a radiocarbon dating on the manuscript’s vellum pages, and they concluded that it was made between 1404 and 1438. These results, however, have not been widely published, causing some to question the authenticity of these reports. Those studying the text have also concluded, based on drawings of physical structures and clothing, that the text was completed in a European setting. These are the few, vague conclusions drawn about this puzzling written work.

Some argue that the text is merely a hoax, a set of gibberish pages meant to create intrigue but with no value or actual meaning. Simply stated, if no one is able to extract meaning from the book, perhaps this is because the document contains no meaningful content in the first place. (Andreas Schinner (April 2007). Cryptologia 31 (2): 95 – 107.) Perhaps it was an attempt by the collector Voynich himself to produce a work which he could sell for a high price, or an attempt by the unknown author to fool contemporaries into thinking he had discovered a text with the meaning to many unanswered questions.

The opposing argument for legitimacy, claims that the manuscript appears too sophisticated to be a hoax. While hoaxes of the period tended to be rather simple by today’s standards, the Voynich manuscript exhibits many subtle characteristics which only show up after careful statistical analysis, which would not have been available during this time period.These fine touches require much more work than would have been necessary for a simple forgery, and some of the complexities are only visible with modern tools, leaving the observer to wonder if it would have been possible to create such a complex forgery, and for what purpose. (Landini, Gabriel (October 2001). Cryptologia 25 (4): 275–295.)

It seems that whatever the original intent of the author, the manuscript will continue to puzzle historians and linguists for the foreseeable future. The question of wether the mystery of the manuscript will ever be revealed is as vague as the work itself.